Yamaha's MT-09 is set to get a substantial makeover. Here are the details 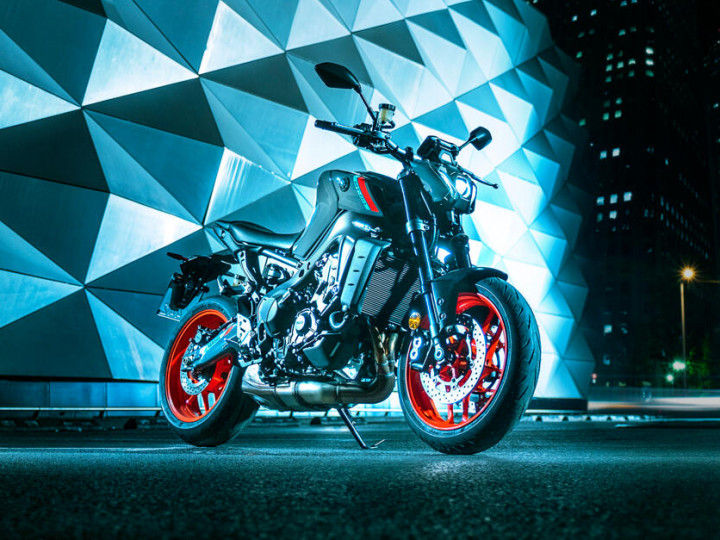 Yamaha has revealed its upcoming MT-09 motorcycle. For 2021, it gets a lot more than a cleaner motor. The new motorcycle is now lighter, more powerful, and packs in a lot more goodies. We take a closer look at the new supernaked via a set of detailed images.

The most visible change is the new headlamp unit. Instead of the previous twin headlamp assembly, it gets a single LED unit flanked by twin LED DRLs.

It also comes with a new fuel tank design and sharper tail lamp extensions. Yamaha has decided to do away with the side panels for a more raw look. The new graphics give it a slightly retro vibe.

Instead of the current swingarm-mounted number plate unit, it is now situated on the tailpiece. It continues to use an underbody exhaust unit which is 1.4kg lighter than before.

While the current MT-09 gets a tiny, offset-mounted instrument console, the upcoming motorcycle features a larger, conventionally mounted 3.5-inch TFT colour screen. The display includes a clock, gearshift indicator as well as water and air temperature.

The inline three-cylinder motor has been increased from 847cc to 889cc. It features a larger bore size and delivers 4PS more than before. The heavily revised  Euro 5 motor now develops 119PS at 10,000rpm. Its peak torque of 93Nm now comes in at 7,000rpm, 1,500rpm lower than before. It offers 7 percent more torque at lower revs.

Electronic rider aids include a new 6-axis IMU. It gets lean-sensitive 3-stage Traction Control System (TCS), Slide Control System (SCS) as well as a front-wheel Lift Control System (LIF) and Brake Control system (BC). Along with a slip and assist clutch, the six-speed gearbox gets a bi-directional quickshifter.

The upcoming streetfighter gets a new Deltabox frame and swingarm. This new frame offers 50 percent more rigidity and is 2.3kg lighter than before. The new aluminium swingarm is 250gm lighter and since it does not support the rear numberplate, it offers reduced unsprung weight.

The suspension gets an upgrade in the form of fully adjustable KYB upside-down forks while the adjustable rear KYB monoshock sits on a new linkage. Updates to the brake setup include a new Nissin master brake cylinder for better feedback. It now gets lightweight 10-spoke SpinForged wheels that reduce the gyroscopic effect and offer lighter front-end feel. Even the rear tyre size has increased to 180/70-17.

The new Euro 5/BS6-compliant MT-09 is expected to be launched in India sometime next year. It will replace the MT-09 that was sold here before being discontinued due to the current BS6 emission norms.