Now in its fourteenth generation, the 2021 F-150 looks even more butch and packs in loads of features 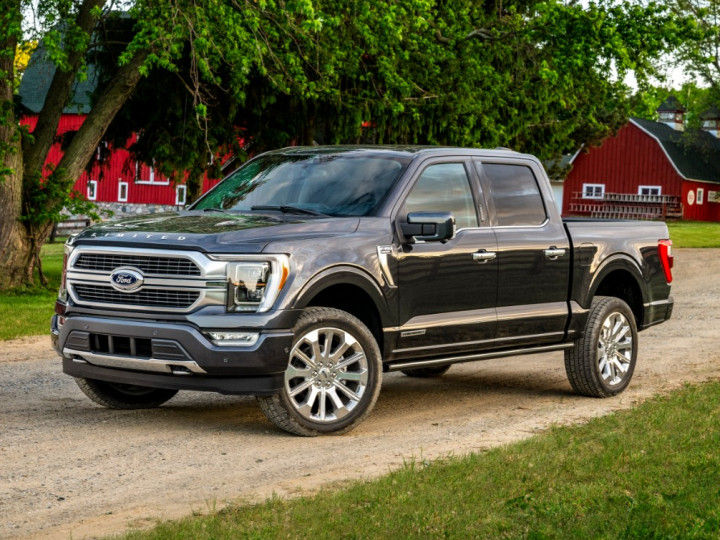 The 2021 Ford F-150 is here! Now in its fourteenth generation, America's most popular pickup truck has grown in size, style and technology. It also packs in a new hybrid powertrain option and comes in various body and cab configurations.

But first, let’s talk about design, one of the F-150’s brownie points. It has loads of presence and will make heads turn while it passes by. You get to choose from 11 grille options depending on the variant you pick and along with the LED headlamps and tough front bumper, it gives the front-end a menacing look. It now sits on large alloy wheels and you can pick from a plethora of designs depending on the variant. At the rear, the F-150’s name tag is embossed on the tailgate, which is flanked by vertically stacked LED tail lamps.

Step inside the F-150’s cabin and you’ll wonder whether you’re sitting inside a truck or a luxury vehicle. The design, though simple, looks modern with plenty of luxury elements like soft-touch plastics or a leather dash top. Another main highlight is the new 12-inch touchscreen infotainment system which features Ford’s latest Sync 4 operating system and connected car technology. Some highlights of this system include online navigation, ad-free music streaming, loads of video content and wireless Android Auto and Apple CarPlay.

The driver gets his own share of features thanks to a new 12.3-inch digital driver’s display. It’s also more practical thanks to the optional Work Surface feature. Basically, the gear lever can be stowed down and there’s a stowed away console shifter which acts as a table to have lunch or work on your laptop. Quite cool, isn’t it?

The F-150 comes loaded with features like cruise control, zone lighting, climate control, a Bang and Olufsen as well as plenty of driver assists like lane keeping assist, pre-collision assist and even hands-free driving! There is also an optional generator onboard that can be used for powering various equipment or charging the battery.

Another major highlight of the new F-150 is the new Powerboost hybrid powertrain. It combines a 3.5-litre EcoBoost petrol engine with a 47PS electric motor that draws power from a 1.5kW battery pack. While Ford is yet to reveal the power figures, it has stated that the F-150 hybrid will be capable of covering around 1126km on a full tank of gas. It also comes with regenerative braking to juice up the battery pack. Enthusiasts can also pick from the brute 5.0-litre V8 petrol unit, 3.5-litre twin-turbo V6 EcoBoost, a 2.7-litre twin-turbo V6 and a 3.0-litre diesel option. All engine options come mated to a 10-speed automatic transmission.

So, the Ford F-150 has made a lot of strides in almost all departments and looks even more appealing than before. But this tough machine won’t be launched in India in the near future. Sigh! It will go on sale later in the United States and will lock horns with the Toyota Tundra and Chevrolet Silverado. Now Ford, when do we get to see the Raptor F-150?