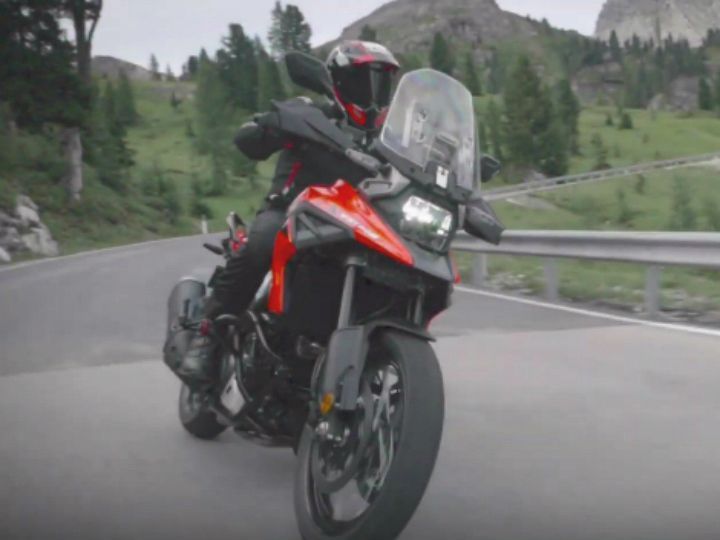 Suzuki has been sharing small teaser videos of the 2020 V-Strom 1000 on its social media platforms ahead of the 2019 EICMA. This time, though, the teaser video isn’t ambiguous as before, as we finally caught a glimpse of the new V-Strom 1000 in all its glory!

The V-Strom 1000 hasn’t received a major update for quite some time now, so it makes sense for Suzuki to unveil an updated V-Strom 1000 at the upcoming EICMA. As per the new teaser, the Japanese bike maker has given its top-of-the-line adventure motorcycle an all-new look. The front end is completely redesigned and now looks like the old-gen Suzuki DR Big. The halogen bulb setup which is seen on the current-gen V-Strom 1000 has been replaced by a LED headlamp. Even the adjustable windscreen is now much bigger than what we have on the current model.

The fuel tank has been slightly redesigned and it looks a bit slimmer than before. However, we will have to wait for Suzuki to make an official announcement about that. Apart from the new paint scheme, the 2020 V-Strom gets a split-seat setup instead of the single-piece setup that is seen on the current model. Also gone is the semi-digital instrument cluster, replaced by a new all-digital unit. However, from the looks of it, the new instrument cluster looks like an LCD unit rather than a TFT display.

In the teaser, the engine casing seems to be new and so is the exhaust system, hinting that Suzuki could’ve updated the motor to meet the new European emission norms. We still don’t know whether Suzuki will increase the displacement from 1037cc or not. In its current state of tune, this unit churns out 101PS of power and 101Nm of torque. However, we expect the Euro 5-compliant motor to have different power and torque figures.

And if the upcoming big V-Strom is Euro 5-compliant, there are chances that Suzuki might bring it to our shores as well!

Suzuki DR Big To Be Resurrected?