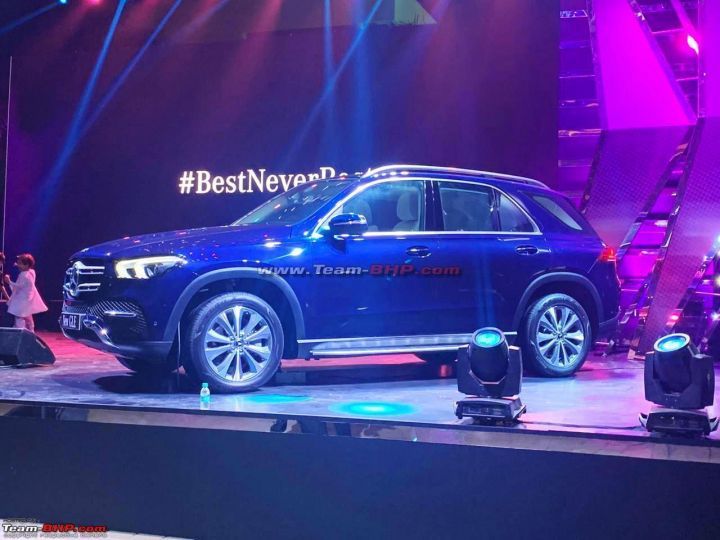 Yes, the Mercedes-Benz GLE was globally unveiled in 2018 and it’s finally coming to India in January 2020. We first spotted the SUV while it was being tested for emissions by ARAI in September. Mercedes began accepting bookings for the SUV the very next month and has now showcased it to its dealers in India. The leaked images are rumoured to come from a closed event, exclusive for Mercedes-Benz dealers. Thanks to these leaks, we now have a clear idea of the powertrain options along with what to expect in terms of variants and features.

Leaked documents suggest that Mercedes-Benz will be launching the GLE in two variants: Exclusive and Elite. There’ll be three powertrain options on offer: GLE 300 d, GLE 400 d and GLE 450.

The GLE 300 d uses a BS6-compliant 2.0-litre 4-cylinder turbocharged diesel engine that puts out 245PS and 500Nm of torque. Nought to 100kmph is claimed to come up in 7.5 seconds before reaching a top speed of 225kmph.

The other diesel mill on offer will be a BS6-complaint 3.0-litre  inline-six turbocharged unit good enough for 330PS and 700Nm of torque. The GLE 400 d accelerates from 0-100kmph in 5.7 seconds and has a top speed of 245kmph. According to the leaked documents, this engine will not be offered at the time of launch and will most likely be introduced by April 2020.

The only petrol engine on offer is a 3.0-litre BS6-complaint inline-six engine in GLE 450 guise. This engine puts out an impressive 367PS and 500Nm of torque, helping it achieve the 0-100kmph sprint in 5.7 seconds with a top whack limited to 250kmph. This engine also gets a 48V mild-hybrid system. All the three engines will be paired to Merc’s 9G-TRONIC gearbox with 4MATIC permanent all-wheel drive.

The fourth generation GLE is expected to come with a price tag ranging between Rs 70 lakh and Rs 1.05 crore (ex-showroom). Although we know more about the SUV now, we still don’t know whether Mercedes will be offering the 7-seater version of the GLE like in markets abroad. When launched the new GLE will reignite its rivalry with the Audi Q7, Volvo XC90 and the BMW X5.