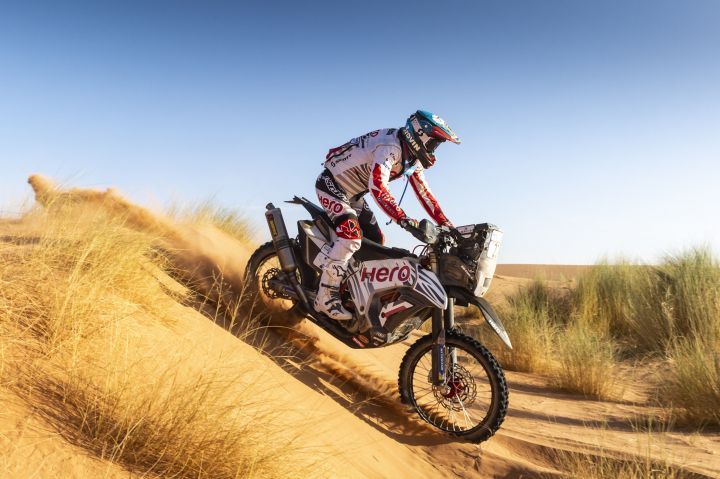 For years, the Rallye du Maroc has been acting as the perfect precursor for the biggest and toughest rally in the world – the Dakar. Hero MotoSports and Sherco-TVS Racing have been participating in this event for nearly five years as it allows the teams to get their bikes perfectly setup for the Dakar. The 2019 edition of the rally proved to be a fruitful exercise as both teams performed strongly; all of its pilots who finished the rally were in the top 25.

However, Hero suffered an initial setback as its star rider Oriol Mena was forced to sit out of the rally due to an injury sustained during practice, which took place just a day prior to the start of the event. Hopefully, Mena should be back on the saddle for Dakar as he has finished in the top 10 in both editions that he has participated in.

Nevertheless, Hero could bank upon the formidable line-up of Paulo Goncalves, Joaquim ‘JRod’ Rodrigues and C S Santosh. Gonacalves, who Hero signed from the factory Honda rally team, was leading the charge for the Indian outfit. He was super strong during most of the stages of the rally, winning stage 4 of the rally. Ultimately, he finished 13th, which bodes well for him as well as for Hero heading into Dakar.

Teammate JRod was just a couple of spots behind Paulo. JRod has been riding well as the Portuguese rider aims to get as confident and as fast he was before his horrific crash at the 2018 Dakar rally. Finishing 15th will help boost his morale.

The lone Indian rider at the event was C S Santosh as Aravind K P and Harith Noah were unfit to take part. Santosh has been consistently upping his pace as he is now in the mix of the top 25 riders of the world. Santosh’s next target would be to better his 34th position that he achieved in the 2018 Dakar rally.

In the Sherco-TVS Racing camp, its new pilot, Johnny Aubert, performed brilliantly to finish the rally in 14th position. Johnny was a strong contender for the top ten for most of the rally as he bagged a fourth place finish in stage 3. Teammate and veteran rider, Michael Metge, was also running strongly in the rally. However, a few mechanical issues ruined his chances of finishing in the top 15. Ultimately, he ended the rally in 21st spot. Lorenzo Santolino was the only rider who could not complete the rally from the two teams, pulling out on the final day.

Both teams now have almost three months to prepare for the Dakar as this year’s event will take place in Saudi Arabia. It is scheduled to take place from 5-17 January, 2020. This is the first time that the Dakar rally will take place in Asia as previously it was held in the South American continent. We hope that riders like Mena, Aravind and others are fit come January to undergo the biggest test of man and machine.

Convert Your XPulse Into A Even More Hardcore...

Hero XPulse 200 Owners Get A Taste Of Off-roading...