Can’t Get Enough Of The New Mercedes GLC? Check Out These Pictures

The latest Merc mid-sizer is remarkably photogenic. Don’t believe us? See for yourself 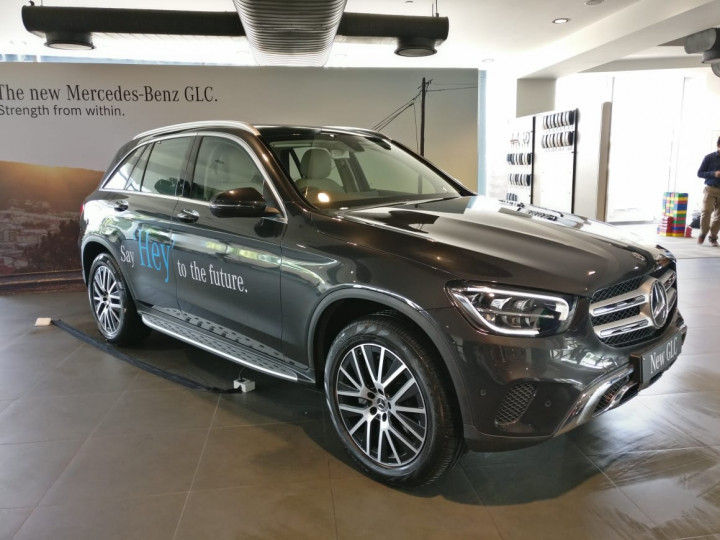 Mercedes-Benz India unveiled the new GLC sport utility vehicle (SUV) on our shores today. Read our launch story here. A mid-size SUV, it slots between the larger GLE SUV and the smaller GLA crossover. What’s new in the GLC? A facelift, BS6 engines, and a host of modern features. The GLC 200 petrol costs upwards of Rs 52.75 lakh, while the GLC 220d 4Matic comes in at Rs 57.75 lakh (ex-showroom pan-India). Check out what the Audi Q5 competitor looks like:

Look at the GLC from the front, and the first thing you notice is its new face. Previously, the GLC had large, swept-back headlamps. They are smaller now and flank a large, hexagonal grille that houses that massive three-pointed star. The front bumper has been restyled too. Changes are subtle but significant and make the GLC look more butch and imposing. The headlights offer a contrast with their dainty daytime running lights (DRLs).

In the profile, the Mercedes GLC hasn’t changed much. The same curved lines and deep creases are as impressive as they were four years ago. With its thin plastic cladding and bright paintwork, the GLC looks more like a station wagon than other cars in its segment.

Move to the rear, and you’re met by the new rounded tail lamps. The LED lights within them are square. A thick chrome strip lines the underside of the car with two exhaust tips on each side. Straight lines and curved surfaces offer a smorgasbord of shapes in the rear fascia.

Step inside the new GLC and you are greeted by one of the most sophisticated user interfaces in the segment. The overall design is not very different from before. It is the same layered dashboard with three circular vents sitting in the centre. The India-spec car doesn't get the turbine-shaped air vents from more expensive Mercs.

Above them floats the touchscreen, which is now larger at 10.25 inches. It can be controlled by anything from touches on its surface to the separate touchpad or even your voice.

Look at the centre console, and all you see is a simple touchpad. No dials and no cursor. This makes the GLC’s infotainment more intuitive (read less cumbersome) to use. If you can’t be bothered to use the touchpad or reach out to the screen...

… there are touch controls on the steering as well, similar to Blackberrys from a few years ago. You have buttons and swivel-type scrollers as well. These operate the driver’s display as well as the infotainment system.

The GLC now gets 19-inch wheels as standard. Mercedes says they are lightweight and aero optimised. Tyres have a less conservative 55 profile and a 235mm section.

Get into the back seat and you’re greeted by simple yet opulent furnishings. The centre air vent is operated by a single control which regulates airflow.

The GLC gets a two-part sunroof, though the one in front is larger than that at the rear. They let more light into the cabin and make the GLC feel ever so premium.

Improvements to the GLC go beyond what meets the eye. This is the first car in India to get the Mercedes Benz User Experience (MBUX), which seamlessly integrates all the infotainment controls to offer an interactive interior experience. It is also the first car in India to get Active Braking Assist, which is part of the GLC’s suite of driver assistance technologies. Do the improvements make the GLC a better competitor to the Audi Q5, Volvo XC 60, and the BMW X3? We can’t wait to find out.