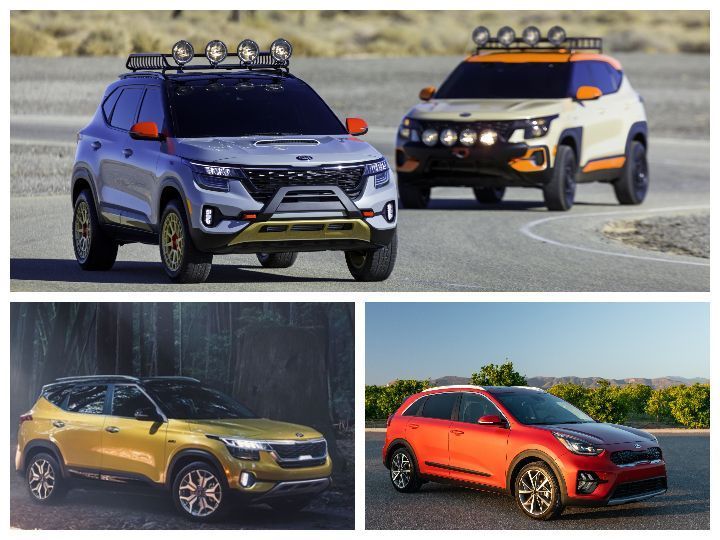 Ever since Kia announced that it would unveil an SUV at the 2019 LA Auto Show, there was a lot of expectations riding on the shoulders of the Korean carmaker. However, to our surprise, it was none other than the Seltos midsize SUV that made its US debut. The Seltos comes with a handful of changes to suit the US market, while looking familiar to the India-spec model. Kia also took the wraps off the macho Seltos X-Line concepts, which are basically two built-for-purpose, butch-looking versions of the Seltos. The Korean manufacturer also showcased the facelifted Niro for the US market at the show. Let’s take a look at them in detail:

The 2021 Seltos made its US debut at the LA Auto Show. While the US-spec model looks similar to the model sold here, it comes with a handful of changes like a rugged skid plate, bigger 18-inch dual tone alloy wheels and a revised rear bumper. Inside, the SUV comes with a floating infotainment system that isn’t connected to the instrument panel. The infotainment system also comes with physical buttons for shortcut functions. Apart from that, the cabin layout is identical to the India-spec Seltos.

The US-spec Seltos also comes with various radar-based driver assistance features that are absent on the India-spec model. Under the hood, the US-spec Seltos comes with a 150PS 2.0-litre naturally aspirated petrol engine and a 177PS 1.6-litre T-GDI turbo-petrol motor. The bigger engine can be had with a CVT while the T-GDI engine comes mated to a 7-speed DCT. It can also be had with all-wheel-drive if you intend to take it off road.

Prices for the Seltos start slightly under the USD 22,000 (Rs 15.79 lakh) mark. The SUV will go on sale in the US by the first quarter of 2020. We can only hope Kia brings the all-wheel drive variant and the drool-worthy yellow paint option to India.

Is the standard Kia Seltos a bit too tame for your liking? Then you might want to have a look at these two concepts - the Seltos X-Line Trail Attack Concept and X-Line Urban Concept. Both models come with their own set of modifications that make them stand out from the crowd.

The Seltos X-Line Trail Concept is for those who occasionally like to take their SUV off the beaten path. It is finished in a two-tone paint scheme that replicates the stirring desert sunset. The eight Hella auxiliary lights mounted on the front bumper and roof should provide enough illumination to light a small town! The SUV also comes with a 2-inch lift kit that gives it a ground clearance of 233mm, while off-road tyres with custom painted alloy wheels give it a more purposeful stance. Powering the Seltos X-Line concept is the 1.6-litre T-GDI engine that develops 177PS and 265Nm, mated to a 7-speed DCT. An electronic AWD system with a centre differential lock is present to claw through the rough stuff. If you do get stuck, there’s an onboard winch that might come in handy.

This particular concept is for those people who primarily use their SUVs on city roads. It comes finished in a custom slate gray paint job along with a black roof that mimics the glass and steel skyscrapers in New York. The SUV also comes with four Hella auxiliary lights. The 2-inch lift kit, custom paint alloy wheels and the powerplant are shared with the Trail Concept SUV.

Both models comes with the same premium interior found in the standard Seltos. Wondering if you could lay your hands on one of these SUVs? We’re sorry to inform that these are just one-off models and will not go on sale.

Kia took the wraps off the facelifted Niro hybrid SUV at the 2019 LA Auto Show. The 2020 model comes with sharper design elements such as redesigned projector headlamps, a more angular bumper and new dual chevron-shaped LED DRLs. In profile, the SUV comes with redesigned dual-tone alloy wheels that can be had in two sizes - 16- or 18-inch. At the rear, the Niro comes with redesigned tail lamps and a sportier rear bumper with a diffuser.

Inside, the Niro comes with a redesigned cabin that looks sportier than the pre-facelift model. Highlights here include a 7-inch digital driver’s display and an optional 10.25-inch infotainment system. It can also be had with an optional Harman sound system as well. Powering the Niro hybrid is a 1.6-litre GDI hybrid powertrain that develops a combined output of 139PS and 264Nm. This powertrain comes mated to a 6-speed DCT. Prices for the Niro will be announced once it goes on sale in early 2020 in the US. The Niro plug-in hybrid variant will also get the same updates in early 2020.