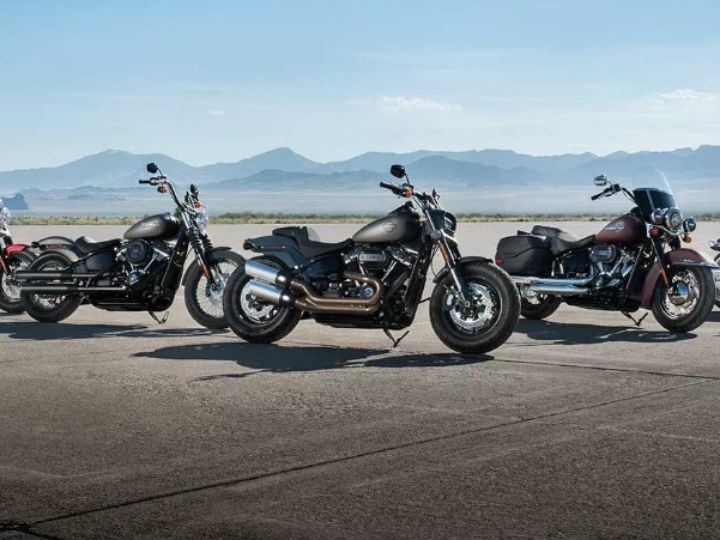 Harley-Davidson India has announced that it will launch its 2018 model year motorcycles on October 12. The American bikemaker will launch the new Harley-Davidson Fatboy, Street Bob and Softail Heritage Classic in our two-wheeler space. Our readers will remember that Harley-Davidson was offering massive discounts on the older Fatboy and Heritage Softail Classic in a bid to clear its stock (Also Read - Harley's Big Clearance Sale). All three new motorcycles fall under the 2018 Softail range as Harley has dissolved the Dyna family of bikes. The main reason behind this move was to offer common chassis and engine configurations but in different iterations, similar to the Triumph Bonneville range.

Among the 2018 lineup, one bike that has made every two-wheeler enthusiast stand up and take notice is the Harley-Davidson Fat Bob. The square LED headlight, massive USD forks, chunky tyres and the massive twin exhaust muffler endow the new Fat Bob with a wicked vibe that is fresh and enticing. The 2018 Fat Bob is powered by the new 8-valve Milwaukee-Eight engine that offers more power and refinement compared to the older powerplant. Harley-Davidson claims that the 1745cc, V-twin, oil-cooled engine produces 145Nm of peak torque at 3000rpm, which is a massive 24Nm more than the outgoing model. The new V-twin motor comes with dual counterbalancers in order to negate primary vibrations.

The counterbalancers also allow the engine to be more rigidly mounted within the chassis, which further enhances the stiffness of the frame for improved handling. Harley also claims that the new bike is faster to 100kmph by 10 per cent in comparison to its predecessor. The steel tubular frame has been redesigned as well and is now 65 per cent stiffer than the previous one. The new frame uses 50 per cent fewer components, which has resulted in weight savings of 12kg, and the bike weighs 309kg. The bike also gets Showa Dual Bending Valve (SDBV) forks up front and the rear monoshock unit is adjustable for preload via a knob, something one could have never imagined few years back. The Harley-Davidson Fat Bob is expected to retail for around Rs 14 lakh (ex-showroom), and will compete against the Triumph Thunderbird Storm.

The Harley-Davidson Heritage Softail Classic has a textbook cruiser styling with chrome and bling. For the new 2018 model, Harley designers have maintained the old-school elements like the chunky mudguard, tall windscreen and saddlebags, but given it a modern LED headlamp and dual-tone paint job in dazzling shades. Also, the new bike gets lot of blacked-out elements which along with the chrome elements make the bike look appealing. The bike also gets lockable and sealed saddlebags. Cruise control also makes its debut on the new bike and the windshield is detachable. The powerplant is the same 1745cc V-twin, oil-cooled engine as seen on the Fat Bob, that delivers 144Nm of torque.

The frame of the bike has been completely redesigned and it is 65 per cent stiffer than the older one. It also uses fewer components and lesser welds, which has contributed in the new Heritage Softail Classic being 14.5kg lighter than the older machine. Harley engineers have also ditched the twin shock absorbers in favour of a monoshock. According to Harley the shock action is conventional, which means that when the rear wheel hits a bump, the shock gets compressed, as opposed to extension in the older bike, for better ride quality. The 2018 Harley-Davidson Heritage Softail Classic is likely to retail for around Rs 18 lakh (ex-showroom).

The new Street Bob will be the most affordable motorcycle in the 2018 Softail range. True to the Bobber tradition, the bike has a stripped down look and is among the most popular options for bikers who like to customise their motorcycles. The bike gets ape-styled handlebars, chopped fender and a petite fuel tank along with blacked-out staggered dual exhausts. The 107 Milwaukee-Eight motor delivers 144Nm of torque while the bike weighs 286kg.

The chassis is suspended on Showa Dual Bending Valve (SDBV) up front. Similar to the Harley-Davidson Heritage Softail, the Street Bob has also omitted twin shock absorbers at the rear for a monoshock unit. The chassis is also lighter and stiffer, which should help in improving the handling dynamics of the new cruiser bike. We expect the 2018 Harley-Davidson Street Bob to retail for around Rs 12 lakh (ex-showroom).