1500 units of both cars will be produced cumulatively by 2016; over 185 crores already invested in manufacturing facility 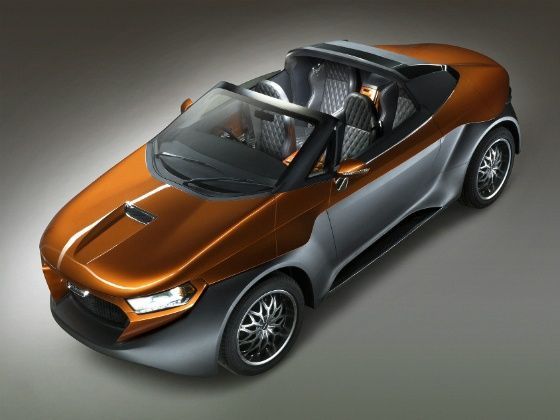 DC Design today revealed two new concepts at the 2014 Indian Auto Expo – the Tia small car and Eleron SUV. Both cars will be produced in 2016 with a capacity of 500 units for the Eleron and 1000 units for the Tia per annum.

The Eleron is a two-door targa-topped SUV which really isn’t a logical concept to enter into production but outrageous concepts are what define the popular automotive design company so the concept is line with DC’s radical approach. It will be powered by a 2.0-litre turbo petrol engine developing 269 PS of power and 360 Nm of torque. The Eleron has a claimed top-speed of 200 Kmph and hits the ton from standstill in 9 seconds. The engine is mated to a five speed automatic and will be available as an all-wheel drive. It gets double wishbone front suspension and air suspension for the rear wheels.

Next up is the two-seater Tia small car. It has a space frame chassis with carbon-composite bodywork and a roll-cage. The mid-engined rear-wheel driven Tia is powered by a 1.2 litre turbo petrol engine and is less then 4-metres long so it qualifies under the lower excise duty slab for small cars. Peak power stands at 122 PS and peak torque is 190 Nm. The Tia gets a 4-speed automatic gearbox, McPherson struts up front and trailing arm suspension at the rear.

It measures a 2550mm x 1688mm x 1406mm (LxWxH) and has a wheelbase of 1620mm. Its compact dimensions give it a turning radius of 4 metres. It is priced at 18 lakh, which seems quite steep for a car with these specifications.

DC Design also showcased the Avanti sportscar that was unveiled at the last Auto Expo. The Avanti’s production will begin in the third quarter of 2014 and will have a annual capacity of 2000 units.