Start saving up, because these are the bikes shown at EICMA that will make their way to India soon 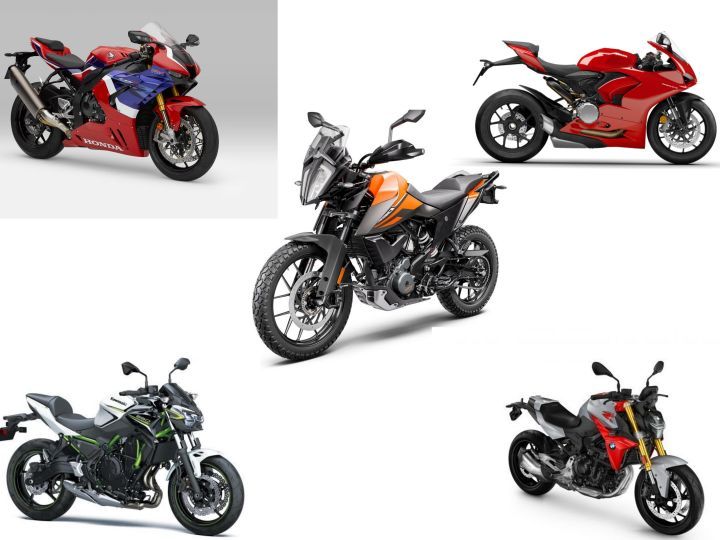 Christmas tends to come a little early for motorcyclists each year, with EICMA taking place in November rather than December. This year’s show has been quite eventful and packed in a lot of exciting new launches and unveils, and a couple of surprises too. Now that the dust has settled and we have some clarity, we can bring you the top 10 bikes shown at EICMA that will make their way to India soon:

Let’s address the elephant in the room. The 390 Adventure is a motorcycle that has been talked about for years now, with multiple spy shots and test mule sightings along the way. The Austrian manufacturer finally unveiled the much-awaited model at EICMA this year, and it has had a mixed reception so far. The powertrain is identical to that of the 390 Duke’s but the motorcycle features long-travel, adjustable suspension at both ends, a more relaxed steering geometry and 19-inch/17-inch front-rear alloy wheel combo.

It also gets traction control and dual-purpose Continental tyres, making it a very well-equipped and competent motorcycle, even if it isn’t quite a hardcore off-roader. However, all these features are expected to significantly drive up the cost of the motorcycle, and we could see the 390 Adventure being launched with a price tag of Rs 3 lakh or more (ex-showroom). Another factor that could drive Indian buyers away from showrooms is the colossal 855mm seat height. KTM is expected to launch the 390 Adventure at India Bike Week next month, along with the 250 Adventure as well, which was recently unveiled online.

At the opposite end of the displacement scale, Honda revealed its new CBR-1000RR-R. No, you’re not seeing double, there really are 4 Rs in its name. The current Fireblade’s Achilles heel is its lack of outright horsepower, so Honda has addressed this, and how! The new bike puts out an earth-shattering 217.5PS and 113Nm from its 999.9cc inline-4 cylinder engine.

Honda has pulled out all the stops, giving the new ‘Blade aerodynamic winglet pods and a comprehensive IMU-assisted electronics package as well. Heck, the SP variant even gets Ohlins electronic suspension and top-of-the-line Brembo Stylema brakes. We’re delighted to tell you that we expect Honda to bring the CBR-1000RR-R and CBR-1000RR-R SP to India next year, but expect a variant-on-variant price increase of around Rs 1 lakh to Rs 1.2 lakh.

Having explored both ends of the displacement range, it’s now time to strike some middle ground with the Aprilia RS 660. The Italian manufacturer revealed a production version of the middleweight sportbike after having shown a concept at EICMA last year. The 660cc engine has been created by effectively chopping the RSV4’s 1100cc motor in half and retaining the forward bank of cylinders.

It uses a 270-degree firing order and puts out 100PS. The engine is assisted by a comprehensive APRC electronics package that includes traction control, five riding modes, wheelie control, cruise control, engine brake control and a quickshifter. All these features can be controlled via the bike’s colour TFT dash. The RS 660 also gets top spec underpinnings with a 41mm upside-down fork from Kayaba and a directly-mounted rear monoshock, both fully-adjustable. We expect Aprilia to bring the bike to India next year as a CBU import, so make sure you have deep pockets if you’re hoping to buy one.

While Kawasaki’s Tokyo Motor Show stall was an action packed affair with multiple new models, its EICMA attendance consisted mostly of Euro 5 updates. Chief amongst these was the Z650, whose parallel-twin motor continues to make 68PS but torque output has reduced by 1.7Nm and now stands at 64Nm. Interestingly, the bike weighs 3kg less than before, now tipping the scales at 187kg kerb.

Aside from the engine updates, the Z650 has also received a new 4.2-inch TFT display with Bluetooth connectivity and an LED headlight. Kawasaki should bring the updated bike here next year and since the updates aren’t very major, we can expect the price tag to remain in and around Rs 6 lakh (ex-showroom).

The middleweight onslaught continues with Italian manufacturer Benelli who officially unveiled its Leoncino 800 neo-scrambler model at EICMA. The bike looks similar to the smaller Leoncino 500 but uses the 754cc parallel-twin motor from the 752S. It is Euro 5-compliant in the Leoncino and produces 81.6PS and 67Nm. The bike is held together by a trellis frame and rolls on wire-spoke wheels with tubeless-type rims.

Both the smaller Leoncino siblings are on sale in India and we expect Benelli to bring us the 800 sometime next year as well. We can expect a price of around Rs 7.5 lakh (ex-showroom).

Coming back to Kawasaki for a moment, the brand has also updated its popular Z900 to meet Euro 5 emission norms. The same drill has been followed, with the updated Z900 also receiving a new TFT display with Bluetooth connectivity and full-LED lighting too. Kawasaki has also finally given the Z900 electronic rider aids, with the new bike getting four riding modes, two power modes and a three-level traction control system.

Despite meeting Euro 5 norms, the engine’s power output has remained the same at 125PS and 98.6Nm. Sales figures for the Z900 are healthy in India and the updated version coming to India is pretty much a foregone conclusion. As a result of all the new additions, we can expect a price of around Rs 8.7 lakh (ex-showroom), which is Rs 1 lakh more than the current iteration.

The Z900 has some new company in the middleweight naked segment in the form of the recently unveiled BMW F 900 R. This is the streetfighter version of the newly unveiled F 900 XR, which is in turn based on the Concept 9cento shown by BMW last year. Both bikes use an upsized version of the 854cc parallel-twin motor that powers the F 850 GS. In the 900s, it has been bored-out to 895cc and produces 105PS and 92Nm.

The F 900 XR sports tourer looks rather similar to the Concept 9cento and features a small front screen and fairing as well as more upright ergonomics and long-travel suspension. BMW has historically offered its full lineup in India, so we can expect these two models to make it to our shores next year as well. Prices could be around Rs 11 lakh and 12 lakh for the R and XR respectively (ex-showroom).

Though it was officially unveiled at the Ducati World Premiere last month, Ducati showcased the new Panigale V2 at EICMA in Milan as well. This is essentially a Euro 5-compliant version of the 959 Panigale, with a new exhaust system and 5PS more power. Final figures are now 155PS and 104Nm, and Ducati has also adorned the V2 with a colour TFT display.

A comprehensive IMU-assisted electronics package has been thrown into the mix as well, but the basic mechanical underpinnings of the motorcycle have remained the same. Being Ducati’s only Euro 5-compliant motorcycle at the moment, we expect the V2 to make its way to India soon at a price of Rs 16.5 lakh to Rs 17 lakh (ex-showroom).

From the other side of the world, Chinese bikemaker CFMoto unveiled its new 700CL-X scrambler. It will be offered in three variants and is powered by a 692cc parallel-twin motor. Output stands at 75PS and 66.6Nm, and the motor is mated to a 6-speed gearbox via a slipper clutch.

THe 700CL-X is suspended on long-travel suspension at both ends, and the Adventure variant even gets knobby tyres. We expect CFMoto to bring this new bike to our shores soon and going by past experience, pricing should be very aggressive too, somewhere around the Rs 7.5 lakh mark (ex-showroom).

Husqvarna has been stringing us along for a while now, with talk of releasing its 401 range in India soon. The Vitpilen and Svartpilen were showcased at EICMA with some minor changes. The bolt-on rear subframe has been modified and is now 40mm longer, in the interest of pillion comfort.

New graphics schemes have also been unveiled for both models. Everything else remains unchanged, meaning a 373cc single-cylinder engine from KTM’s 390 range, putting out the same figures too. The Swedish brand will enter the Indian market next year and we can expect pricing around the Rs 3 lakh rupee mark (ex-showroom) for the 401s.