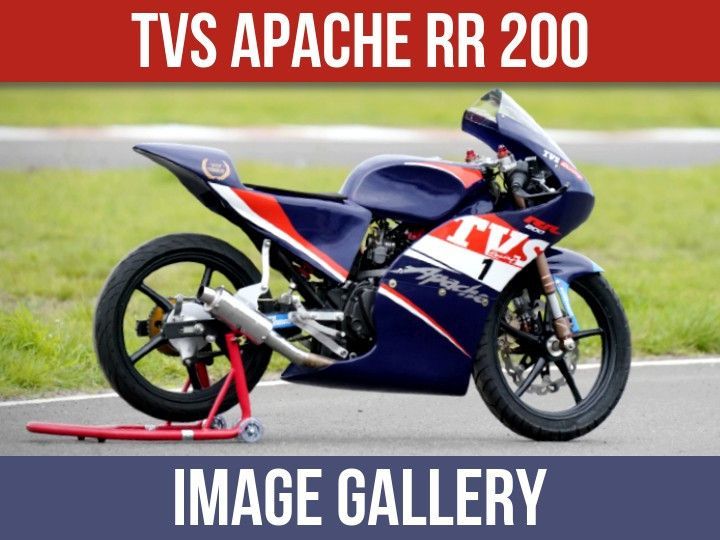 Not long ago, TVS Racing, the factory arm of TVS Motor Company, took the wraps off the Apache RR 200, an exclusive bike that will only be ridden in TVS One Make Championship’s new rookie category. Here’s us taking a closer look it:

Since it’s a race-only bike, components like the lights and seats have been removed to shed weight. Instead, you get a low-drag race fairing and lightweight bodywork finished in deep blue.

Flowing red graphics add to the bike's visual appeal. But we feel the front could’ve been a little more radical with a racier, nose-down stance.

In the middle, you have a slim sculpted tank built to help riders lock their knees and have a better feel and control over the bike.

Other elements on the bike include black alloy wheels (probably lighter than TVS’s standard alloys), a shiny USD fork, rear-set footpegs, a clip-on handlebar, and a rear racing cowl.

Speaking of the USD fork, it seems like a premium, fully adjustable track-only unit, unlike the preload-adjustable Showa-sourced fork on the 2021 RTR 200. The rear monoshock looks similar to the RTR’s, though. As for the tyres, TVS uses its very own soft compound race tyres to further improve the bike’s handling.

The braking setup is different too, as the RR 200 gets a petal disc up front clamped by ByBre calipers.

Then there’s the powertrain. The RR 200 continues to use the same 197.8cc single-cylinder engine from the RTR 200. However, the internals have been tweaked to extract more performance. There’s also a short free-flow performance exhaust, which offers lesser resistance to gases, thereby improving engine performance.

While TVS hasn’t given us a number, we expect the RR 200 to put out nearly 25PS -- 5PS more than RTR 200 4V. Also, the RR 200 should be significantly lighter, giving it an impressive power-to-weight ratio.

Sadly, as mentioned above, the RR 200 is exclusively for TVS One Make races, so you can’t buy it. But if you’re a talented motorcycle racer aged between 13 to 19, you can register for the selection rounds and go racing sitting astride this masterpiece.