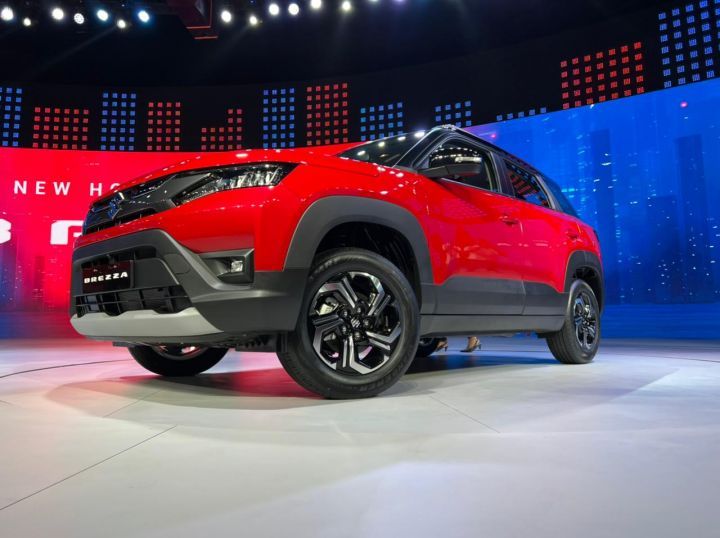 Maruti Suzuki India has recently launched the 2022 Brezza SUV from Rs 7.99 lakh (ex-showroom). The new-gen SUV gets a major design makeover, plenty of new features, and an updated petrol engine with a new automatic transmission. If you had your eyes on one and aren’t able to visit your nearest Maruti showroom, fret not, as we explain the new SUV in ten detailed images.

When it comes to design, the 2022 Brezza, with its sleeker front grille and edgier LED headlamps, looks bold. The faux skid plate and black cladding on the front bumper adds a dash of ruggedness to the overall design.

The 2022 Brezza’s overall silhouette is identical to the outgoing model. Keen eyed viewers, though, will notice the larger rear quarter glass, while the design of the alloys are new, keeping it up with the times.

It’s the rear end where things are radically different. The Brezza now sports sleek LED tail lamps and bold ‘BREZZA’ badging in between them. Maruti has done away with the Vitara moniker from now onwards. The number plate housing has been shifted lower down in the tailgate, while the rear bumper gets black cladding and a faux silver skid plate.

Inside, the Brezza’s dashboard design has been inspired by the new Baleno. Elements like the new 9-inch floating touchscreen infotainment system and the brown trim running across its width look modern. Bits like the steering wheel, dials, and climate control have been shared with the Baleno.

In terms of features, the Brezza gets new additions such as a heads-up display, wireless phone charger, single-pane sunroof (a first for a Maruti), connected car tech, up to six airbags, and electronic stability control. Bits like cruise control, keyless entry with push-button start, and rear AC vents have been retained. Sadly, no ventilated seats, which would have been welcome.

The Brezza is powered by a new 103PS 1.5-litre K15C petrol engine (from the XL6), paired with a 5-speed manual and a new 6-speed torque converter automatic. When it comes to fuel efficiency, the SUV returns up to 20.15kmpl, depending on the powertrain and variant you pick.

Prices for the Brezza range between Rs 7.99 lakh and Rs 13.96 lakh (ex-showroom). The SUV is offered in four broad trims: LXI, VXI, ZXI, and ZXI+. It locks horns with the Kia Sonet, Tata Nexon, Hyundai Venue, Nissan Magnite, Renault Kiger and the like in India.

What do you think about the new Brezza? Do you like its design or not? Drop your thoughts about the new SUV in the comments below.