Multiple EV launches, upcoming vehicles spotted and the farewell of a legend make up this week’s edition 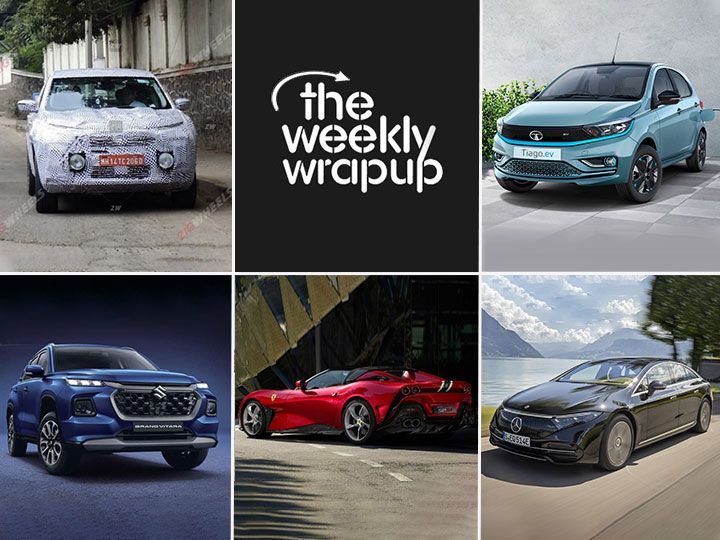 Missed tuning into ZigWheels this week? Well, fret not, as we have compiled a round-up of all the top automotive news that unfolded in the last week of September:

Maruti has released the full price list of the Grand Vitara. The launch was followed by the price reveal of the hybrid trims of the Toyota Hyryder. Both compact SUVs are offered with the same powertrain options: a 1.5-litre petrol mild-hybrid with five-speed manual and six-speed auto ‘box options along with the choice of all-wheel drive (only with the manual); and a three-cylinder 1.5-litre petrol teamed to a strong-hybrid unit and an e-CVT. To see how they compare on prices, read this report.

Tata launched the all-electric version of the Tiago. The electric hatchback has created a new segment in the electric segment and has become the most affordable EV in the country. Order books will open on October 10, with deliveries set to begin from January 2023.

The facelifted Tata Harrier made its first appearance draped in disguise from head to toe. Still, the spy shots revealed that the front end sported a redesigned grille and headlights. However, the main thing will be the ONE big addition to the features list.

After the AMG-spec EQS, Mercedes has launched the locally assembled EQS 580 4Matic variant in India. It is the first locally assembled luxury EV in India and thanks to that, there is a whopping price difference when compared with the fully imported AMG EQS 53.

Nissan India has been on the sidelines since the launch of the Magnite Red Edition, with no new products or announcements as such. That is about to change as the carmaker is set to make an announcement on October 18.

Lamborghini has drawn the curtain on the 11-year run of its flagship supercar, the Aventador. Production of the naturally aspirated V12-powered raging bull has been brought to an end as the last unit rolled out of the factory in the form of the Lamborghini Ultimae Roadster.

Heading into the electric era, Citroen has revamped its look with a new emblem and brand identity. The new logo pays homage to the original 1919 emblem with the oval circumference and will be the means of identity for all Citroen models from mid-2023 onwards.

Deliveries of the Mahindra Scorpio N commenced this week. The marque has a delivery target of 20,000 units by December this year, out of which, deliveries for the top-spec Z8L units will be prioritised by the end of November.

At the plea of an anonymous client along with a blank cheque, Ferrari birthed a one-off model based on the 812 GTS, called the Ferrari SP51.

Lamborghini launched the new Urus S; a quicker and more powerful version of the standard Urus that sits below the Performate variant. It gets subtle cosmetic revisions as well.