“Looks like both of them aren’t going to let each other pass without a fight”- Vivek Abraham, race commentator 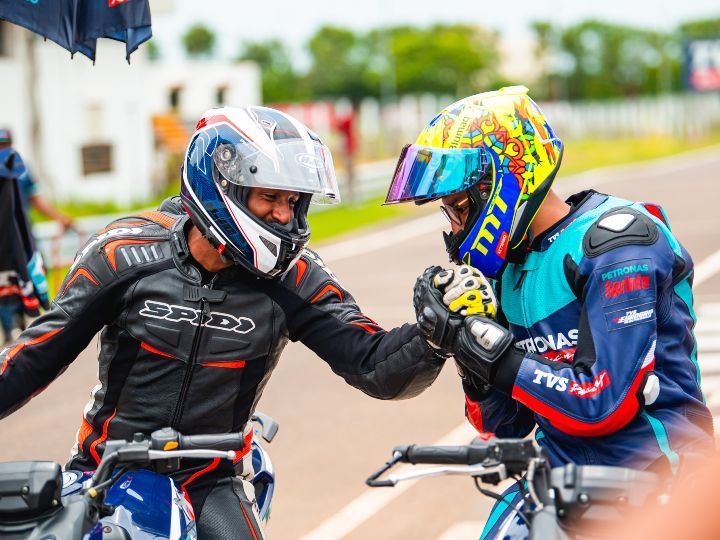 And for good reason. See, while round one ended well for me, this game of tag Karan Singh and I had going on at Kari Motor Speedway was left on a cliffhanger. Down to the wire, in the last lap, both Karan and I wanted the top step and an obsession came over us. But like in the Matrix, the obsession to win comes at a cost – ‘Red pill’ (patience) or ‘Blue pill’ (kamikaze). And for me, patience paid off.

And fortunately for Karan, learning from one’s mistakes came fast, so he was not going to make it easy for me this time around. Round two ushered in another weekend of racing, which meant I was returning to the Madras Motor Sport Track near Chennai after nearly a decade. Thanks to two epic failures on this track, I was led astray from racing all those years ago. But I was a younger guy, and patience wasn’t my best quality in my twenties, unlike these chaps.

Glance over practice, because it was no benchmark of how the weekend was going to transpire. The bikes were the same: TVS Petronas Apache RTR 200 4V. It’s unreal how much potential this street bike has locked away. Some light mods and it’s a hoot to ride around a track. And those skinny TVS Eurogrip ‘W’ rated tyres, it will help you cling on to the road by the tips of your fingernails if you’re brave enough. And that’s the magic word right there, ‘trust’- my next lesson in life.

Who shaves off nearly eight seconds from their practice time in qualifications? During qualification, we were all finding 4 or 5 seconds worth of speed as we got comfortable with the track and the bikes. Karan rode into the pits sure as day that he had the pole, and he did. He’d gone from 2:28:726 at practice to 2:21:270 in qualification, securing the pole position. Right behind him was Daniel Rajkumar, followed by me and then Mandar Sawant, the little space rocket.

By Sunday (race day) it was clear, I simply did not have the pace this weekend to lead the charge. I needed more time on this technical and fast-flowing track to start scratching the surface of my potential here, hence the goal was simple – be patient, be consistent, and hunt these guys down.

Five laps around a 3.717km race track; Sounds simple, doesn’t it? But it’s not. While you race at full speed, time slows down inside the helmet. Your mind and mentality must be 100 percent in the moment, and that commitment is a hard act to follow. It created this enormous sense of respect for racers and athletes in general. But the red lights on the startline were about to vanish and Mandar was about to launch past us like a shuttle breaking the exosphere from P4!

It’s very difficult for me to break down in words how beautiful those five laps were for my eyes from inside that helmet. After chasing down Mandar who led brilliantly, I was observing the power of obsession and will by Karan who bravely put it on the line every time, no matter how many times I came after him. Corner after corner there was an attempt to usurp the throne. Contact was made, close calls were common, but he emerged as the fastest guy across the line that day.

On Sunday, both Karan and I attained redemption in some form. He concluded our dog fight from Kari in a spectacular fashion and I finally got the answer to what being a sportsman is all about. My dad had a big bag of trophies from his days as a track and field athlete. Not all were golden or the biggest, but there was one surely. Because giving it your all everytime is what matters. Trust and go!

And remember, even on the days where you’re facing absolute and certain defeat, it’s important to go out punching. Because, as Eminem once said, “a plaque of platinum status is whack if I'm not the baddest.”