The luxury SUV was delivered to Vadodara, India from Mercedes’ facility in Tuscaloosa, USA 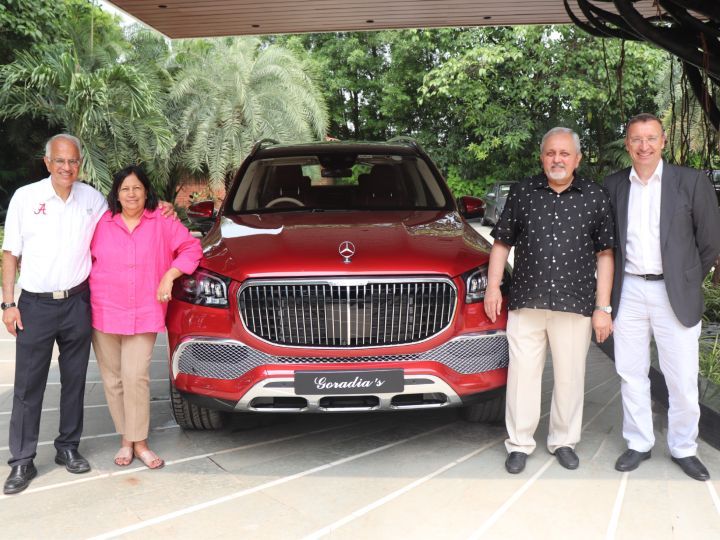 The story of this Hyacinth Red Metallic Maybach GLS 600 takes us back to 1968. Mumbai was then known as Bombay and was starting to flourish as India’s finance capital. Amit Goradia and Bharat Balasubramanian shared a hostel room in IIT Bombay and remained good friends after graduation. Amit went on to establish his own business empire while Bharat joined Daimler-Benz and later became the chairman of Mercedes-Benz R&D India and former VP of Daimler group research and advanced engineering.

An ex-board member of Mercedes-Benz India, Dr Bharat Balasubramanian is currently a professor and the executive director of the centre for advanced vehicle technology at the college of engineering, University of Alabama. Being smitten by the three-pointed star and specifically the S-Class, Amit decided to place an order for a Maybach GLS as a gift to his wife. Dr Bharat stepped in to help his close friend and former roommate by customising and personally documenting the whole manufacturing process from the ground up following all security protocols. The SUV was manufactured at Mercedes-Benz international SUV manufacturing plant in Tuscaloosa, Alabama, USA. Here, only a limited number of Maybachs are handcrafted every year.

Commenting on this special delivery, Martin Schwenk, Managing Director & CEO, Mercedes-Benz India, stated, “The making of this particular vehicle marks the spirits of friendship, unmatched enthusiasm, and excitement of two friends, the passion for excellence, and an endearment for brand Mercedes-Benz. This indeed is a rare and highly inspiring story of celebrating decades of friendship between two IIT-Bombay classmates, and we at the Mercedes-Benz family are extremely proud to be part of this story.”

Interestingly the Maybach GLS uses e-suspension which was actually developed by Balasubramanian’s team in Germany. The SUV was delivered on September 18, 2022, at Vadodara in the presence of Martin Schwenk, former CEO of Mercedes-Benz India, Dr Balasubramanian (who travelled all the way from the US) Amit Goradia and his wife Ms Geeta Goradia.