This Is The Yamaha Fascino 125’s Thai Cousin

After launching it in Indonesia earlier this year, Yamaha has now rolled out the Fazzio for the Thai market as well.

One glance at the Fazzio and its retro design will catch your attention. The round LED headlight, dual-tone paint scheme, and centre brace on the apron accentuate the Fazzio’s appearance. The standard version is available in four colours: Red, Yellow, Grey and Turquoise, while the Smart Key version is available in two colour schemes: Gray-orange and Black-green, both of which look absolutely smashing.

Yamaha has equipped the Fazzio with some nifty features too. Apart from LED illumination and the Hybrid tech, it gets a fully digital instrument console with Bluetooth connectivity, a phone charging socket, and a keyless lock system.

The scooter is suspended on a telescopic fork and a monoshock. Braking duties have been entrusted to a front disc and a rear drum brake. That said, the scooter misses out on ABS. The Fazzio rides on 110/70-12 front and rear alloys wrapped in tubeless tyres, and it gets a 5.1-litre fuel tank. 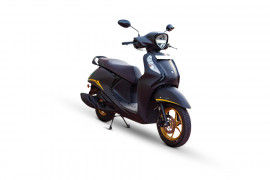