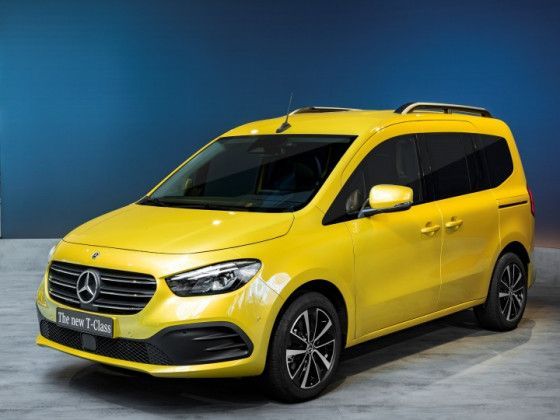 Mercedes-Benz has carved a fresh niche in the lifestyle MPV segment in Europe with the new T-Class MPV. It’s based on a Renault Kangoo platform, but presents a more premium alternative to the Renault and its rivals such as the Citroen Berlingo and VW Touran. It’ll be sold at a starting price of around Rs 25 lakh (EUR 30,000), which makes it a much more affordable premium MPV than the V-Class.

On the outside, the Mercedes T-Class is instantly recognisable as a Mercedes. It’s underpinned by a Renault-Nissan CMF platform, and its size is comparable with the India-spec Kia Carens. Here’s a handy table with each of their dimensions:

The T-Class is not as long as the Carens, but it is slightly wider and significantly taller than the Korean MPV. These dimensions are for the 5-seater version of the T-Class; the 7-seater with a longer wheelbase will follow later.

You get a roof railing that can be converted into an overhead luggage rack good for up to 80kg. Other exterior features include 16-inch or 17-inch light alloy wheels, LED High Performance headlights and an optional twin rear door setup instead of a tailgate.

Inside, the T-Class is more plasticky than other Mercedes models that have moved farther upmarket in recent times. Design is reminiscent of older Mercedes cars with turbine-style air vents, a floating infotainment touchscreen and a semi-digital instrument cluster with a 5.5-inch display. The 7-inch touchscreen is likely the smallest available in a modern Mercedes, but it still gets the MBUX infotainment system and Mercedes Me connected car features.

Optionally, you can get the dash and door panels upholstered in NEOTEX for a nubuck-leather appearance.

Aside from these premium touches, the T-Class’s focus is on safety. It can be optioned to accommodate up to four child seats compatible with i-Size ISOFIX mounts. In addition, you get seven airbags, hill start assist, cross-wind assist, a driver fatigue warning system, lane-keeping assist, parking assist and blind spot monitoring. If you opt for a trailer coupling, a Trailer Stability Assist system is also on offer.

The T-Class will be available with two 1.3-litre petrol engine options offered with 102PS and 131PS states of tune. Alternatively, there’s a 1.4-litre diesel unit that makes 95PS/260Nm and a top-spec 1.3-litre diesel good for 115PS and 270Nm. The most powerful petrol engine in the T 180 variant gets you from 0-100kmph in 11.6 seconds – not fast, but adequate performance for a family MPV. In simple words, these specifications put the T-Class head to head with the Kia Carens in terms of performance.

Later, the T-Class will spawn an all-electric small minivan, the EQT. The carmaker aims to offer all-electric vehicle architectures from 2025 onwards, and aims to make its entire fleet carbon-neutral by 2039. It’s not likely that the Mercedes T-Class makes it to our shores, but the EQT could be added to the carmaker’s slowly expanding electric lineup in India later in the future.