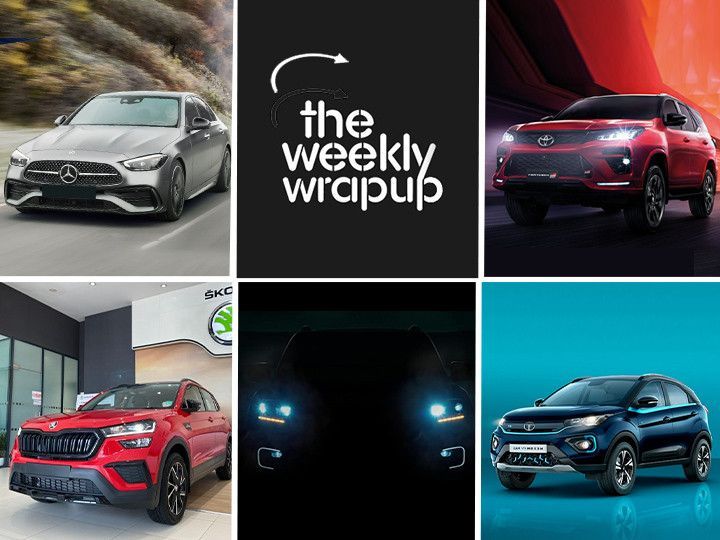 Been living under a rock for the past week? Worry not, as we’ve got your back with all the eventful car news that unfolded this week. Here’s the top stories:

Mercedes has launched the new-generation C-Class in three trims. With prices starting from Rs 55 lakh (ex-showroom) onwards, the luxury sedan gives you a hint of the S-Class in a compact, but feature loaded package.

Called the Nexon EV Max, the long range iteration of the standard Nexon EV has been launched with prices starting from Rs 17.74 lakh (ex-showroom). It packs a larger 40.5kWh battery pack (30.2kWh standard) which translates to an increased ARAI-claimed range of 437km over the standard models 312km.

Skoda has taken the covers of the Kushaq Monte Carlo edition. The trim adds sporty-cues all over the compact SUV with the addition of a new 8-inch fully digital instrument cluster. It is based on the Kushaq’s top-spec Style trim.

The carmaker has launched the Grazoo Racing GR variant of the Toyota Fortuner in India. The GR-S is the equivalent of a Hyundai N Line model, with add-ons such as an all-black cabin with inserts of red stitching, GR-specific seats and slight cosmetic changes. But all this commands quite a hefty premium over the standard model.

Mahindra has dropped another teaser of the upcoming Scorpio giving a better hint at its design elements and possible features. The third-gen SUV is likely to be launched in June and is expected to be powered using the XUV700’s petrol and diesel engines.

Range Rover premiered the 2022 Range Rover Sport with bold design elements and cleaner engine options. It gets both petrol and diesel engine options assisted using mild-hybrid technology. A pure-electric derivative of the SUV is also in the offing.

Mild Facelift For The Eight-Gen Phantom

Rolls Royce has given the Phantom a mid-life refresh, calling it the Phantom Series II. The luxury sedan comes with subtle styling upgrades, as well as more tech and equipment. But it still retains the 571PS 6.75-litre twin-turbo V12 petrol engine. We expect it to arrive at our shores later this year with a price tag north of Rs 10 crore (ex-showroom).

Bentley has introduced the long-wheelbase edition of the Bentayga. The luxury SUV gets extended by 180mm and gets a new 4+1 seating configuration along with the 4- and 5-seater options. It packs a plethora of features that gives the luxury SUV flagship-type opulence. We expect it to be launched in India by early 2023.

Any hopes for Ford to have a potential return to India have been dashed. The carmaker decided to pull the plug  on exploring the possibility of using one of its plants in India as an export base for EV manufacturing via the Production-Linked Incentive (PLI) scheme approved by the government. The carmaker had already halted local manufacturing and sales in the country back in September 2021.