To err is human… 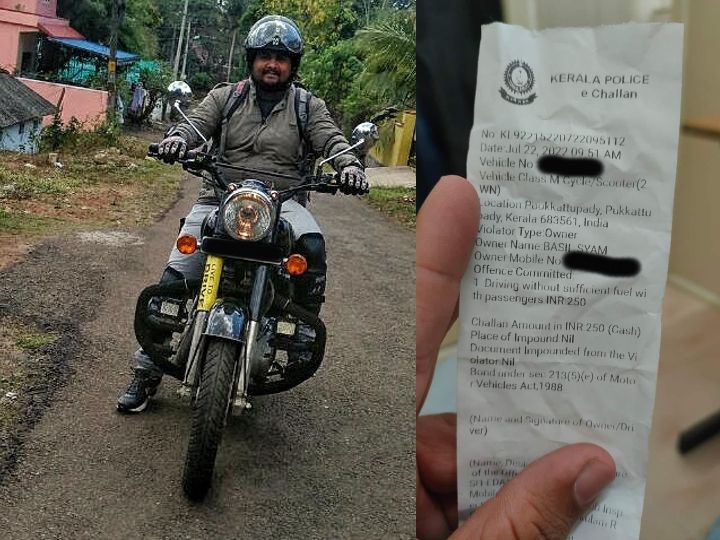 Ever ordered a dish on Zomato and the restaurant called to say it was unavailable, they were sorry and if they could entertain you with another option within the same price? Well, Basil Syam from Kerala has recently been through something similar, but instead of Zomato, it was a brush with the law.

When the photo of a challan for ‘driving without sufficient fuel with passengers’ was found floating around the internet, it got us giggling on the absurdity of the offense. So we got in touch with Basil for a little one-on-one to know what went down.

Basil, who rides a Royal Enfield Classic 350, was in a hurry to get to work. And like most of us, he let the front wheel slip into a one-way street, but pointing in the opposite direction to save some time. But to his despair, the long arm and loud whistle of the law pulled him over for a fine well deserved

The transaction was simple – a fine of Rs 250 was paid, a challan was given and Basil was on his way. It’s only later that he noticed the slip was not for breaking the one-way code but driving without sufficient fuel with passengers. Although a genuine mistake, we got hold of a Kerala MVD official, to know more about this absurd traffic offense.

Turns out this is a rule that applies to commercial transport vehicles (yellow number plate). According to the book, any vehicle, be it a bus, minivan, car, or even two- and three-wheelers registered for commercial use are prohibited from refuelling while the passengers are seated in the vehicle.

A wrong challan was issued but no harm and no foul was done. But like everything in life, there’s a silver lining. We now know something new about the law. So next time your Uber/Ola driver pulls over for a shot of CNG, just report them! So what if they give you a bad rating and no one will ever give you a ride. At least you did your bit! #JustKidding