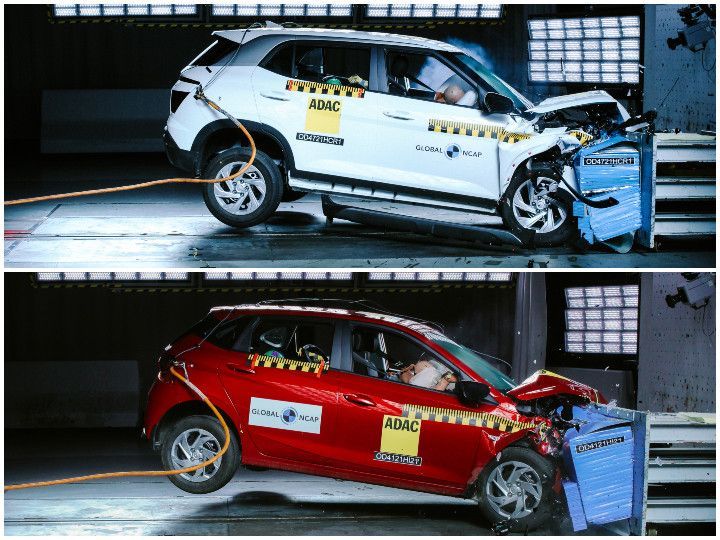 The latest round of the Global New Car Assessment Program crash tests has seen the  India-spec Hyundai Creta compact SUV and i20 hatchback go through the tests. Both vehicles received three-star ratings for adult and child occupant safety. Global NCAP tested the base-spec variants of both vehicles that are equipped with government-mandated dual airbags, rear parking sensors and ABS and EBD.

According to the report, “the bodyshell was rated as unstable and it was not capable of withstanding further loadings.” GNCAP says the footwell was also unstable, and there’s marginal protection for the driver and passenger’s knees as “they could impact with dangerous structures behind the dashboard.”

The top-spec SX(O) trim level starts at Rs 16.46 lakh (ex-showroom Delhi) for the diesel-manual variant. That’s a Rs 6.18 lakh leap from the base model that you’ll have to take to get a full suite of airbags, an auto-dimming inside rearview mirror (IRVM) and a Highline tyre pressure monitor (TPMS). A cost-effective lowline TPMS is available on all except the base E variant.

The Hyundai i20 received better scores than the Creta for both adult and child occupants’ safety. Global NCAP rated the i20 hatchback’s bodyshell and footwell as “unstable”.

There were similar issues with the driver and front passenger’s knees that were in danger of impacting structures behind the dashboard in an accident. But their legs had at least “adequate” protection, and their heads and necks showed “good” protection.

As standard, the i20 comes with government-mandated safety features, but it trumps the Creta by offering ISOFIX child seat mounts on all variants. Only the base variant misses out on a reverse parking camera and a rear-view monitor.

However, six airbags, ESC and HAC can only be had in the top-spec Asta (O) trim level that costs from Rs 9.49 lakh onwards (ex-showroom). Even in the i20 N Line, you can only get side and curtain airbags in the top-spec N8 variant. The 2022 Maruti Baleno is the only other premium hatchback in the segment that offers six airbags.

In a word, the crash test figures for the Creta and i20 are average at best. The Secretary of Global NCAP, Alejandro Furas, commented: “Although the overall star rating of these models might seem reasonable, the continued reluctance of manufacturers like Hyundai and Toyota to equip safety systems such as ESC and side body and head protection airbags as a basic requirement in India is disappointing.”

The safety standards for Indian cars are expected to change for the better later in 2022 when six airbags become mandatory for carmakers in India. In addition, active safety features such as autonomous emergency braking (AEB) and lane departure warning (LDW) are trickling down to more affordable models, including the Creta-rivalling MG Astor.

Interestingly, Global NCAP noted in its report that although the i20 gets AEB as standard in Europe, the India-spec model doesn’t even provide ESC, side impact protection airbags or three-point seatbelts for the rear centre seat as standard. Active safety features are not offered on any variants of the Creta or i20.

Safety standards for cars are expected to improve steadily in the country. On the other hand, infrastructure improvements and reforms in driver education and licensing haven’t been as fast-paced. Several factors affect road safety in India. Given the relatively small population of car users in the country, it’s imperative to focus on the other aspects such as infrastructure, freight logistics, and even traffic management.