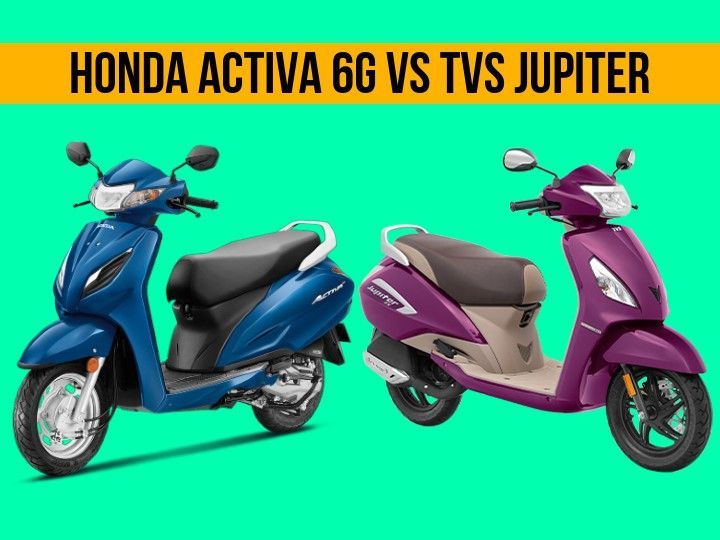 The Honda Activa is not just another scooter in the market, but the one that shaped the idea of scooters for the modern-day about 20 years ago. We have ridden the Honda Activa 6G, and how does it fare against its top rival, the TVS Jupiter, in terms of performance and mileage?

Both scooters are powered by a 110cc engine, producing similar power and torque figures. And clearly, even the performance figures are pretty identical with close to no difference in the 0-60kmph acceleration test. Yes, the Jupiter wins, but by barely any margin. But this is despite the Jupiter being 1kg heavier than the Activa 6G, tipping the scales at 107kg kerb weight.

Both scooters do a great job of being daily commuters on traffic-prone Indian roads. However, the Jupiter’s power kicks in slightly earlier as compared to its rival making it slicker in the city. The Activa 110’s feels alive nonetheless.

Unlike the Activa, the Jupiter’s braking hardware includes an optional front disc brake, which obviously gives it an edge over its rival. The disc brake allows the Jupiter to come to a stop a good 3.5 metres before the Activa when pulling up from 60kmph.

In the city ride, the Jupiter gives better fuel efficiency, however, in the highway run, the Activa takes the lead by almost 4kmpl. Fuel efficiency is an important deal when it comes to everyday commuters, and both scooters offer good mileage, but the Jupiter takes the win here, especially because it performs better in the urban grind. The Jupiter’s win can be credited to the fuel injection system and the ET-Fi (Eco Thrust Fuel injection) unit, which has improved the fuelling of the Jupiter.

Overall, both scooters make for incredible daily drivers that are frugal, reliable and fuel efficient.