Here’s When Facelifted MG Hector Is Likely To Break Cover It is possible that MG could launch the facelifted Hector in India on December 20. The updated SUV will come with new styling cues, a redesigned interior and additional safety features. There are no expected mechanical changes. Let’s take a look at what all we know about the SUV ahead of its launch.

The facelifted Hector will get a few new styling cues on the outside. The first undisguised look at the SUV which surfaced through a spy shot recently, reveals the redesigned front grille that takes more real estate and other aesthetic revisions that have been detailed in the spy story. The SUV’s silhouette and rear end styling should remain familiar and largely similar to the current model.

As hinted by an official image teaser before, the cabin of the MG Hector will get the majority of the nips and tucks. The dashboard and centre console layouts have been restyled, and the positioning of the AC vents has changed and silver highlights have been added. A new 14-inch portrait-style touchscreen takes the centre stage on the dashboard and the SUV will also get driver-assistance features such as adaptive cruise control, lane-keeping assist and forward collision mitigation, similar to the MG Astor.

The Hector’s existing features list, including equipment like a panoramic sunroof, powered tailgate, ventilated front seats, wireless phone charging and heated outer rear-view mirrors, is also likely to be carried over to the new model.

No major powertrain revisions are expected. The India-spec Hector should continue with the same 143PS 1.5-litre turbo-petrol unit, 143PS 1.5-litre petrol mild-hybrid and 170PS 2-litre diesel power units as the existing SUV. In Indonesia, Hector's cousin, the Wuling Almaz, also gets the option of a 2-litre strong-hybrid powertrain, but it remains to be seen if this powertrain will be offered in the facelift here.

An option, a CVT automatic is offered with the ICE-only petrol powertrain, while the diesel and petrol, and mild-hybrid units get a six-speed manual gearbox.

The new MG Hector isn’t likely to replace the current model, rather, both will exist alongside each other in the carmaker’s portfolio with the facelift probably being limited to higher end variants. The facelifted model will carry a premium over the current Hector that retails between Rs 14.42 lakh and Rs 20.35 lakh (ex-showroom). It’ll continue to take the fight to the likes of the Hyundai Creta, Tata Harrier and Kia Seltos as well as the Mahindra XUV700 and Jeep Compass. 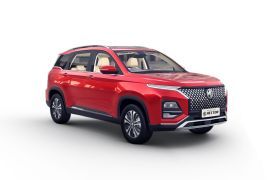