This Petrol-electric Hybrid Is The Perfect Post-apocalyptic Bike 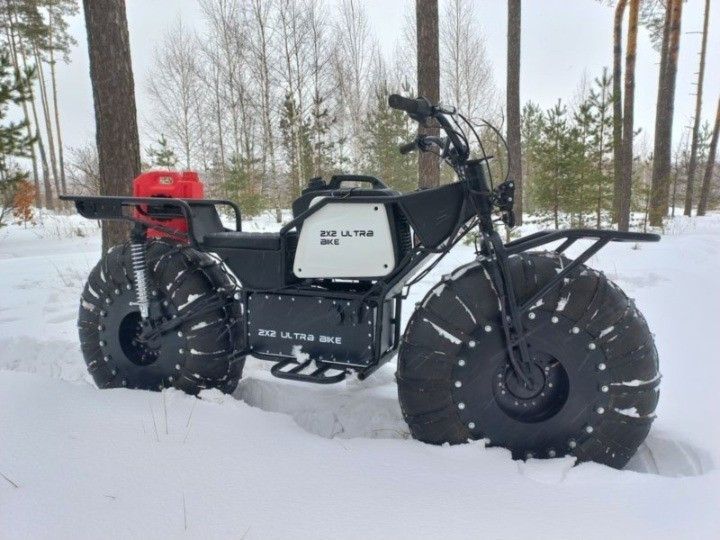 Motorcycles with all-wheel drive systems have always been fascinating as they offer much better offroad dynamics compared to conventional motorcycles. What happens if you add a hybrid powertrain and also some engineering magic to make it amphibious as well? Well, that’s exactly what US-based startup Robo.Systems has done with its 2x2 Ultra Bike.

The 2x2 Ultra Bike’s design looks as spartan as one of the popular AWD ICE-powered bikes, the Rokon Trail-Breaker. Its barebones frame is linked to a fork up front (sans shock absorbers), whereas the rear gets twin shock absorbers. They’re linked to aluminium rims with low-pressure balloon tyres. These rims also double up as storage units, with each having a generous 20 litre capacity. Robo.Systems says they can be used to store fuel for the generator or drinking water. It’s fully sealed and has two outlets for draining and pouring in fuel/water.

Each wheel has a 1000W hub motor producing 2kW peak power on each wheel. This AWD setup can propel the bike to a top speed of 48kmph, and is linked to a 38Ah, 1.6kWh Lithium iron phosphate battery pack. It offers a 50km range in pure electric mode and can be charged in one hour using a 1500W charger. Supplementing this is a 0.85kW generator that recharges the battery pack, thereby enhancing the range considerably. At 9kg, the generator is light enough and can be removed to make it a pure electric bike too. Oh, and there’s even a 3000W inverter that can power electrical tools or devices.

Oh, and if that wasn’t enough, the company also offers optional air tanks on both sides with frame mounted braces to maintain buoyancy, making it amphibious enough to ford through small water bodies. The tanks can be inflated using the compressor that’s powered by the inverter. Pretty clever, eh? It’s even got an all-LED lighting, LCD instrument cluster, and Bluetooth connectivity.

What’s even more impressive is that the bike starts from USD 1,990, which is Rs 1.54 lakh. The company also offers a few accessories to spruce up your ride. Summing up, the company seems to have equipped the Ultra Bike with all sorts of tech in a very versatile, compact package, making it a true-blue go-anywhere machine.