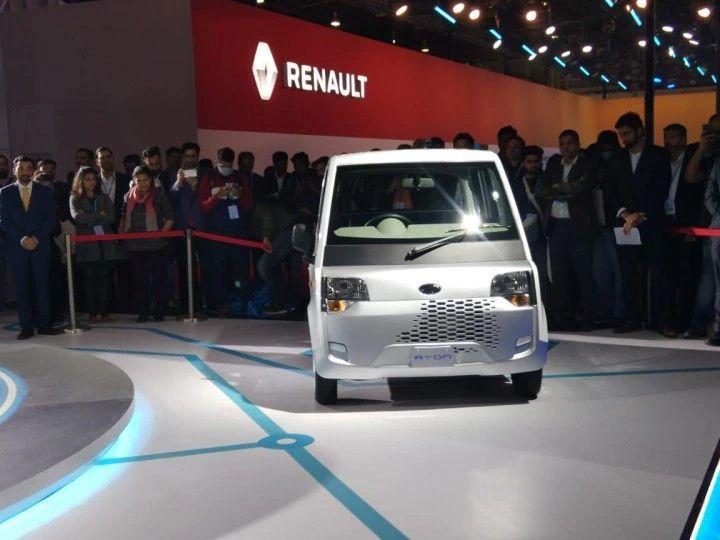 Remember the Mahindra Atom from Auto Expo 2020? It was a cute little electric vehicle (EV) meant for last-mile connectivity, sort of a four-wheeled autorickshaw of the future. After staying under the wraps for multiple years, it seems that the EV is finally nearing a launch. Its specs and some features have been revealed in a leaked RTO document.

What exactly is the Mahindra Atom?

The Mahindra Atom is classified as a quadricycle, so it isn’t a regular car or people mover. Think of it as an all-electric rival to the Bajaj Qute, meant for zero-emissions last-mile connectivity in towns and cities. At 2728mm, it’s about the same size as the Qute, too.

The concept showcased at Auto Expo 2020 had a boxy aesthetic with large windows and two doors. Its electric platform allows for a flat front fascia with a pair of halogen headlights placed below the windshield.

At the rear, you get a pair of simple three-element taillights with indicators and reversing lamps. Despite being underpinned by a monocoque platform, the Atom has a large rear windshield and even a lockable luggage compartment!

Each of its variants weighs under 500kg and can carry a payload of 398-445kg depending on the battery size.

Inside, the Atom offers seating for up to four occupants. The driver sits in the single front seat, and passengers have enough room to slip in and out of the rear bench from the curb-side door. There’s even a phone mount and 12-volt socket in the dashboard, and the show car had a leather-lined steering wheel and air conditioning!

The Mahindra Atom will also offer 4G connectivity to help with fleet operations.

Variants and specs of the Mahindra Atom

Speaking of air conditioning, two out of four Mahindra Atom variants will be AC-equipped. The lower two variants will be offered with a 7.4kWh battery pack, while the K3 and K4 will feature a larger battery. A standard 11PS (8kW) electric motor powers all variants of the Atom.

Here’s a handy table for reference:

We expect to hear more about the Atom from Mahindra in the coming weeks. It’s expected to make its debut in the second half of 2022, possibly at a starting price of under Rs 5 lakh. It’ll likely be offered exclusively to fleet operators, and you might not be able to buy it as a privately-owned vehicle.