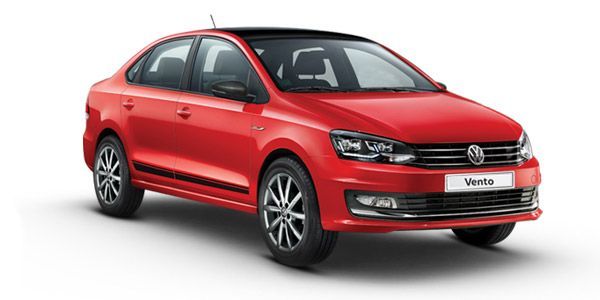 The Volkswagen Vento is the second sub-Rs-15-lakh sedan the company sells in the country and slots in above the Ameo sub-4-metre sedan. It was first introduced in the country in 2010 and has been on sale ever since with small changes made from time to time. It was given a refresh in April 2017 where it received features like all-LED headlamps. The Volkswagen Vento continues to be based on the same platform as the Polo hatchback, and considering the company is not planning to launch new MQB-based products here anytime soon, will continue on soldiering till it becomes too old to be competitive in the market. Most recently, Volkswagen has added a cosmetic ‘Sport’ variant to the Vento lineup to make it more appealing.
Read More

Volkswagen has been prepping the facelifted Vento for quite a while now. Spy shots of the facelift have been spotted tested on Indian roads in disguised and raw form. And now we know that Volkswagen will launch the Vento facelift alongside the Polo facelift on September 4 in India.

The front fascia reveals a GTI-esque face and the bonnet gets a cutout to occupy the VW logo just like the Polo. While the side profile remains the same, the spied sedan was seen riding on dual-tone alloy wheels from the Cup Edition car. A closer look also reveals a sleek chrome strip running along the lower section of the doors.

Under the hood,the 1.2-litre TSI will likely be continued alongwith the 1.6-litre MPI motor.

The Vento facelift is expectedbe priced at a slight premium over the pre-facelift version.Once launched, the Vento will continue tocompete against the Hyundai Verna, Honda City and the Maruti Suzuki Ciaz.

Q. Should I buy Volkswagen Vento by this year(September 2021) or wait for next generation?
Q. Which octane number petrol should I use in my Vento 1.2 TSI car?
Q. Does September facelift for Vento has interior changes? View All Answers
Q. I want to purchase an SUV, in a price range of 10-15 lakhs in Volkswagen? View All Answers
Q. I am planning to buy VW Vento Highline TDi, which one is better Vento Highline TDi or Skoda Rapid Style TDi?
Q. Is there automatic transmission available in petrol version of Volkswagen Vento? View All Answers
View More Questions
Q. How is the Audio quality in Rapid with comparison to VW Vento? Which Drives much better Rapid or Vento? In which colour Rapid looks best?
Q. Hello, I am confused between Skoda Rapid and Volkswagen Vento, Petrol top end automatic. please suggest which is a better buy View All Answers
Q. I m facing issue in injecter of vento..recently i replaced all..should i sell this car or not? Model is 2011..mileage is 96000. How long injector gives good performance - Vento? View All Answers
Q. I am having vento diesel high line diesel purchased in year 2013 dec . I have been asked to replace timing belt . Car driven : 92000 km . I am confused should I wait or go for replacement. Further do delay of replacement of timing belt will affect other parts ? View All Answers
Q. 2011 model vento disel 1.6 which company engine oil is better? View All Answers
Q. Some people has advised here that the maintenance cost for Vento and parts cost are much higher than others but the real VW oweners shares some different experience. As I will purchase my first car, please advise Vento will be good for me or not? View All Answers
View More Questions
All Vento 2015-2019 Questions and Answers

The premium mid-size sedan segment already has a lot of great choices. But with the Fiesta upgraded with an automatic gearbox, the competition gets even more interesting