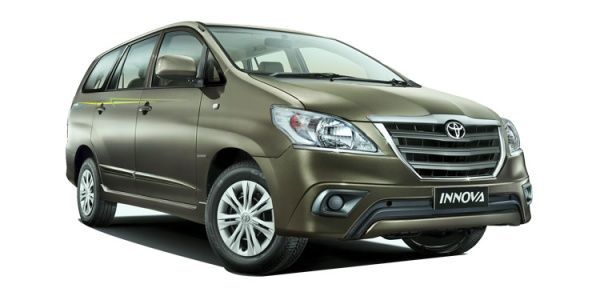 The Toyota Innova in its latest avatar gets cosmetic enhancements to keep up with the times. The Innova has gone on to be a success like no other Toyota product with the primary reason being its versatile nature and its immense practicality. The exterior monoform design might not appeal to everyone at first, however it does free up a lot of interior space. Once inside, you feel as though you have come to a different world. The quality of fit and finish cannot be questioned. Ride comfort is good and performance is adequate.
Read More

Toyota’s longest selling model till date, the Innova was introduced in 2005 and has pulled on for a full decade. It will be replaced by end of this year or early next year however. Despite such a long run, the Innova continues to sell in high numbers due to its durability, comfort and Toyota’s service quality. The Innova competes against the likes of the Renault Lodgy, Honda Mobilio and Nissan Evalia in the MPV segment but is positioned price-wise a segment above. Prices of the Toyota Innova range from Rs.12.29 to 15.81 lakh (Ex-showroom Delhi)

The Innova is one of the largest MPVs in the market and the only one on a ladder frame chassis. The Innova has received a few major facelifts on the inside and outside to look like the MPV it does today. Toyota’s attempt to keep with the times seems to have worked as despite the very Chinese grille and dated looks, the Innova sells very well. The Innova now sports a sharper front end and a slightly reworked rear, which is its last update till the new Innova is introduced.

The Innova used to have a petrol and a diesel motor earlier but considering the specifications required for an MPV, there was no demand for the petrol. The diesel Innova is powered by a 2.5-litre engine developing just 102PS of power and 200Nm of torque. Performance levels on the Innova are a bit wanting considering its 1.7-tonne kerb weight. The weight also affects its mileage, which at 11.2kmpl is considerably lower than its competition.

The base Innova is bare bones basic but move up the variants and the top end Innova will offer you leather seats, automatic climate control, touch screen entertainment system and a reverse parking camera. On the safety front, Driver and passenger airbags are standard on all variants while ABS is offered on all variants except the bottom two.

The Innova is an excellent MPV for long distance journeys as the levels of comfort and space are unparalleled. But it is a bit long in the tooth now and the performance and mileage do not justify the premium you pay for it.

Toyota unveiled the Innova Crysta yesterday at the 2016 Auto Expo as the second generation of India’s favourite MPV, the Innova and promises that it has a lot to offer.

Renault has now stepped into the MPV segment with its latest offering, Lodgy. We pitch it against the Honda Mobilio and the Toyota Innova to see which one rules the roost, at least on paper. Get complete comparison review on the basis of price, specs, images, interior and exterior at zigwheels.com

Think people carrier and the first thing that comes to the mind is the Toyota Innova. Now in its third upgrade, we take it for a quick spin to tell you why it is the king of the MPV segment.