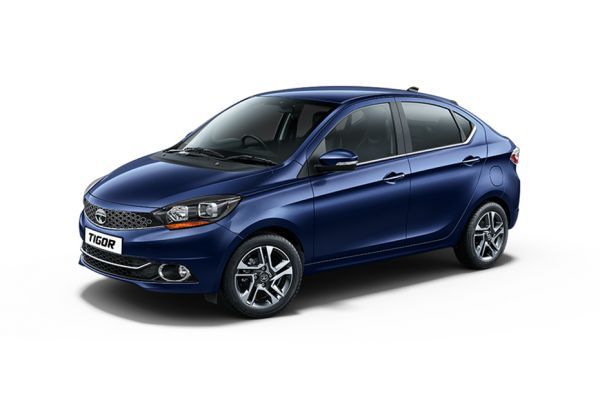 The Tiago’s elder sibling is more than a hatchback with a boot slapped on. With the Tigor, Tata Motors has stretched the wheelbase of the car by a full 50mm. This is to ensure that the Tigor not only looks like a small sedan (or styleback, like they choose to call it!) but also has the space to back it up. It also packs a huge list of features, and a boot that’s happy swallowing a grown adult if it absolutely had to. Compromises come in the form of the engines. Both the petrol and the diesel engine are adequate for daily use, and nothing more. If you like your cars racy and fast, Tata has served up a hot JTP variant that should set your pulse racing just fine.
Read More

Tata has now launched the AMT gearbox in the XM and the flagship XZ+ variants. The Tigor XMA is priced at Rs 6.39 lakh whereas the Tigor XZA+ costs Rs 7.24 Lakh (both, ex-showroom Delhi). These prices are set at a premium of Rs 44,000 over their manual transmission counterparts. The previously available XZA variant, however, has been discontinued. Tata’s Tigor will also get a facelift soon and this time it might not be limited to cosmetic updates only. In the spy shots, the front grille was missing and the Tigor facelift was wearing rudimentary headlights. This could hint that the carmaker might redesign the front end of the Tigor with elements from the Altroz to keep it in line with the Impact 2.0 design. The side and the rear are likely to remain the same as the current car.

The Tigor gets a BS4-compliant 1.2-litre petrol and 1.05-litre diesel motor currently. While the petrol motor will be updated to comply with BS6 norms, the diesel will face the axe. The high costs of upgrading the diesel engines for BS6 emission norms will subsequently drive up the cost of the Tigor. The Tigor facelift is expected to hit roads before the end of this year or at the 2020 Auto Expo. It is likely to cost more than the current car which retails from Rs 5.48 lakh to Rs 7.64 lakh (ex-showroom Delhi).

The stylish compact sedan from Tata is ideal for in-city commuting. That is, if you like your driving relaxed and easy

Tata Motors’ new Tigor is a cub that has just strolled into the sub-4 metre sedan pen. Is it packing more than just striking looks? We spend a day to find out.

The Tata Kite 5 compact sedan has officially been unveiled at the 2016 Indian Auto Expo and has us impressed by its good looks. Read on to know what we think about this new car.