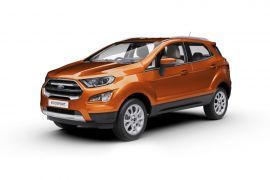 The refreshed EcoSport sports a familiar design. The updated face is a lot more aggressive compared to the outgoing one, but there’s no mistaking this compact SUV for anything else. The top-spec Titanium and Titanium+ variants get halogen projector headlamps and daytime running lamps, that adds a premium touch. Rounding things off is the new gril le and bumper combination that imparts some more muscle to the baby Ford. The side and the rear remain practically unchanged, save for a new set of alloy wheels (17-inch for the Titanium+ and 16-inch for the Titanium) and a mildly retouched rear bumper. In the S and the Signature Edition variants customers will also enjoy the novelty of a sunroof that was added into the EcoSport lineup along with the return of the EcoBoost engine.

It’s on the inside where Ford has really worked on. As years passed by, the EcoSport’s dash appeared cluttered and messy. Well, that’s not a problem anymore as the new layout is a lot simpler. Titanium+ variants upwards get a large 8.0-inch touchscreen that features Android Auto, Apple CarPlay and Ford’s SYNC3 tech. The base-spec Ambiente trim will feature a conventional audio system and Ford’s phone dock, where as mid-spec variants will get a 6.5-inch touchscreen unit. Other updates include a new steering wheel, instrument cluster, a tyre pressure monitoring system and a front armrest. On the features front, the top-spec version gets automatic headlamps, automatic climate control, cruise control with limiter and six airbags.

Ford Cars
View All
View All