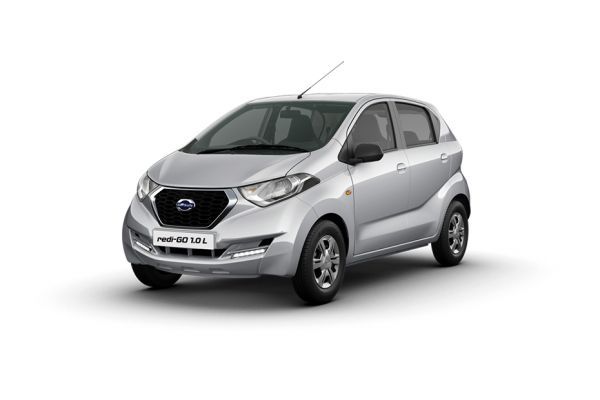 Datsun has given the answer to the likes of Maruti Alto and Alto K10, Renault Kwid, Hyundai Eon and Tata Nano in the form of its redi Go budget hatchback. Redi GO is retailed in the price range of Rs 2.41-3.72 lakh (ex-showroom, Delhi) and has got that two engine options - 0.8-litre and 1.0-litre with respective output of 54 PS / 72 Nm and 68 PS / 91 Nm. Both these motors come fitted with 5-speed manual transmission powering the front wheels of the car. Funky and youthful styling of the redi Go is one of its key highlights and MPV-like stance of the car maximizes the cabin space inside. The 1541 mm of height also ensure that there is no dearth of the head room even for the tall passengers. The quality levels are acceptable though the fit and finished could have been better at some places.
Read More

The facelifted Datsun redi-GO has started reaching dealerships ahead of its launch. Notable changes include a smoother shoulder line, new headlamps, L-shaped DRLs, and new wheels.

It is likely to borrow some bits from the GO as well as feature tweaks to the dashboard layout and upholstery. The biggest change expected is the addition of a touchscreen infotainment system, possibly an 8-inch unit from the Renault Triber. It is likely to continue with the 0.8-litre and 1.0-litre petrol engines, albeit with BS6 updates.

The redi-GO facelift is likely to be launched later this year at a premium over its BS4 counterparts owing to the upgrades expected. Post launch, it will take on the likes of the Renault Kwid and Maruti Suzuki S-Presso.

Does a bigger engine turn a need based car into something you’d want?

The Japanese, the French, and the Indian hatchbacks compared on paper