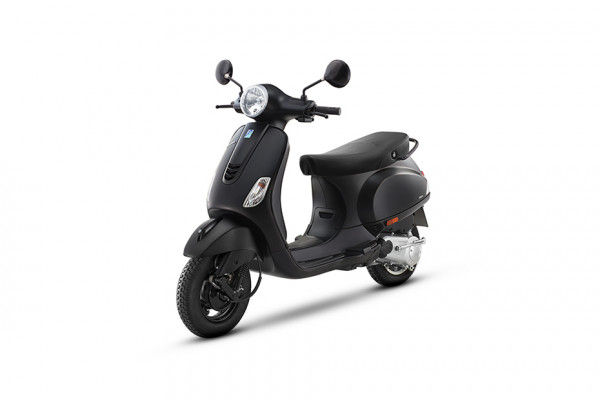 Vespa has not provided any new features to justify the high price premium, kitting the Notte 125 with just the mandatory BS6 updates: fuel injection and an OBD port. The rest of the scooter remains the same with the 125cc engine retaining its output of 9.92PS and 9.6Nm.

Paired with a CVT unit, the scooter draws power from a 125cc three-valve single-cylinder engine that generates 10.6PS at 7500rpm and 10.6Nm at 6000rpm. Suspension duties are handled by trailing setup at the front and a single shock absorber at the rear. Being an entry-level scooter in the Vespa range, it uses drum brakes on both ends. Even the three-spoke alloy wheels are shod in tubed tyres. Vespa could’ve offered a front disc at least as an option considering the price it commands. The underseat storage capacity stands at 17 litres, and the fuel tank can hold 7 litres of petrol.

It is basically the same as the Vespa LX 125 but gets a full black colour scheme. The bodywork is in matte black and the three-spoke wheels, grab rails are in black as well. However, the exhaust heat shield, in contrast, sports chrome. For instrumentation, the scooter employs an analogue unit (speedometer, tachometer) with a small digital inset for trip readings.

Honda Activa 125 : Though the Activa 125 trails behind marginally in outright output figures, it is much more affordable (by around Rs 10,000). Moreover, the Activa also features LED headlight compared to the Vespa’s halogen unit.

TVS NTorq: The TVS NTorq not only offers a sportier-looking design, but is also loaded with an information-rich fully digital instrument console that’s Bluetooth compatible as well. Despite the kit, it is also a lot more affordable at Rs 59,687 (ex-showroom Delhi). It also offers the best in class acceleration and ride quality. To know more, read our comparison road test here.

Suzuki Burgman Street : The Suzuki Burgman Street is a maxi-style scooter which is marginally affordable (by around Rs 2000). It also features a modern bodywork, complete with LED headlight and tail lamp. The scooter offers better practicality than the Vespa with its large 21.5-litre underseat storage in addition to the two 1-litre pockets on the front apron (the Vespa also gets a storage compartment up front).

What is the price of Vespa Notte 125?

What is the Tyre and Wheel type of Vespa Notte 125?

Does the Vespa Notte 125 have ABS?

No, ABS feature is not available in Vespa Notte 125. View full specification of Notte 125.

Which is better Vespa Notte 125 or Honda Activa 6G?

What is the EMI of Vespa Notte 125 in Delhi?

What are the colours available in Vespa Notte 125?