TVS hasn’t altered the design for the BS6 Apache RTR. The sporty-looking headlight cowl is complemented by beefy tank extensions. It gets a single-piece seat. At the rear, you have LED tail lamps and split grab rails.

The TVS Apache RTR 180 sports a halogen headlamp with LED DRLs flanked by bulb indicators and an LED taillight. The instrument console is an -digital unit. You get a tachometer, dual tripmeters, odometer, speedometer, fuel gauge, clock, low-battery and low-fuel lights, and maintenance indicator. It also gets a segment-first 0-60kmph acceleration timer and Supermoto2 ABS, which is TVS-speak for single-channel ABS. Other notable features include Glide Through Traffic assist, which ensures the bike can crawl at low speeds by simply modulating the clutch and using the engine torque.

The Hosur-based TVS Motor Company is back with a bang this time with a better-equipped and all-round motorcycle in the form of the new Apache RTR 180. Since the days of the Fiero, TVS has been churning out products developed on the race-tracks and incorporating fundamentals gained from the Company's active participation in racing.

And though the Apache has always enjoyed decent fan-following and race-credentials, somehow its track lessons have failed to deliver on the street and the company has been unsuccessful in challenging the might of its arch rival, Bajaj Auto. Let's see if the new Apache RTR 180 delivers all that it promises and lives upto the expectations of its followers.

Design and style: A Devil in Angel's guise

Never has the Apache RTR appealed to my eyes as much as the bike in white. Very few street-spec bikes can really carry off the angelic-look with panache and elan. While the fuel efficiency test runs, a couple of times she was parked by the side of the road, and as I admired her beauty under the overcast weather, I could see every passerby turn around to give the bike a second look. The big 'RTR' logo on the Apache's flanks adds a lot of spunk to the bike and goes well with its belligerent stance. The front fork barrels and disc calipers doused in golden paint adds a sophisticated touch to the Apache RTR. An RTR 180 exclusive touch is a sporty rear mud-guard holding the number-plate in place and also aluminium foot pegs which are available as an option.

Ergonomics is one thing which TVS really needs to pay attention to the Apache series. The foot-forward riding posture of the Apache has always played a major spoilsport in enjoying spirited riding. It has been prevalent ever since the first model rolled out of the factory. While the clip-on handlebars and sporty seat feel just right for city as well as highway and track use, the foot pegs are just too forward and fail to substantiate the sporty character of the bike.

We understand the efforts going in to strike a balance between sporty feel and city comfort, but why is it taking so long for TVS to achieve something that has been mastered by its competition and bettered with time like the new Pulsars and the new Yamahas? Maybe it is TVS Company's track-focused outlook which is restricting them from getting the right balance. We all know that strong sales numbers come from the street and not from the track, not just in India but even abroad. 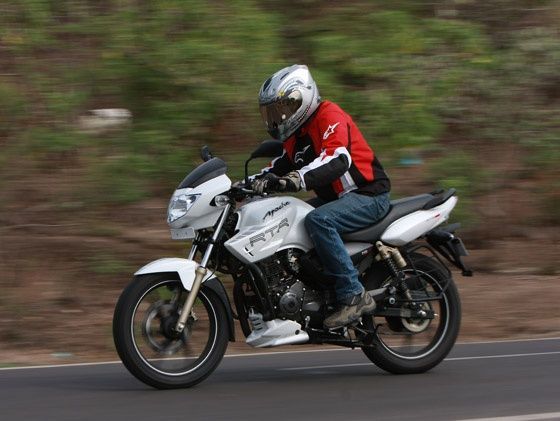 The Apache always had a high-revving motor right from the first model launched in 2006, when it quickly became the most preferred set of wheels for the track as well as for spirited riding. The new RTR 180 carries the same genes but in a much more docile and approachable manner. The 177.4cc single cylinder air-cooled engine is a bored out version of the reliable TVS motor seen on earlier generation Apaches. The power figure has been upped to 17.3PS (at 8500rpm) from the RTR 160's 16PS. The torque too has been significantly increased from 13.1Nm to 15.5Nm while the rev-range of the torque has been made wider to 6,500rpm instead of the RTR160's 6,000rpm. A wider spectrum of the torque means more grunt and availability of power even at lower revs, improving the in-town rideability of the bike. The bike employs carburetor unlike fuel injection seen on the RTR 160 FI, which also gave TVS the freedom to place the new RTR 180 within the reach of an average buyer.

Apart from the wheelbase and the wheels, there are no major changes made to the double-down tube cradle frame and the RTR 180 retains the same underpinnings as seen on the RTR 160. The wheelbase now measures 1326mm, lengthened by 26mm over the RTR 160. This move has considerably helped in giving the Apache RTR a much stable feel on the road. On a race-track, a slightly twitchier motorcycle will be better in terms of handling as it will tip-in quickly with less effort and help reduce the time spent going into a corner. But on the road and under real world conditions, the handling needs to be complimented by stability for obvious reasons like safety and to aid the confidence inspiring ability of the bike. The older Apache was ultra-flickable into corners but severely lacked mid-corner stability and its tendency to tip over quickly into corners was more scary than friendly on the street for many.

The increased wheelbase is the most striking change and a welcomed one on the new RTR 180. The bike feels much more planted on the road, mid-corner and definitely more street-friendly than ever before. Another change is the adoption of 17" wheel on the rear as against the 18" inch rear wheel incorporated on the previous Apache models. The RTR 180 also gets a 200mm diameter petal disc for the rear while upfront it incorporates a 270mm petal disc. The suspension duties for the front are handled by 105mm telescopic forks and the TVS exclusive Monotube Inverted Gas filled shocks (MIG) with spring aid twin shock absorbers employed on the rear are well upto the task of taking hard thrashing, be it bumpy roads or hard-cornering. However, the ride is not as plush on the new RTR compared to its rivals and suspension feels a bit stiffer than before - but that only helps in giving the Apache a sportier handling and providing precise feedback. 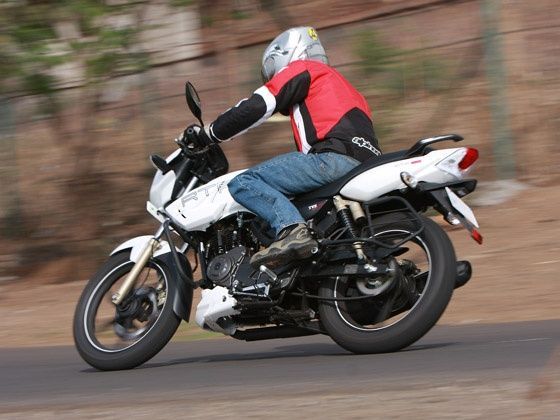 Finally, India is witnessing performance wars in the motorcycle industry and bike-makers are slowly upping the ante in terms of performance of their products. While Yamaha stunned the competition with its YZF-R15 last year, this year Bajaj Auto went all out with the new Pulsar 220 DTSi - a blow which landed directly on each and every manufacturer in India trying to make a mark in the premium motorcycle segment. The TVS products have always been competitive but the top honour of being the fastest bike in the market has been evading them ever since they entered the premium segment with the Fiero.

Sadly, this time also the new Apache RTR 180 fails to beat the top contender, the Pulsar 220 DTSi in the performance war. However, the new RTR 180 beats its direct competition, the 2009 Pulsar 180 DTSi in terms of acceleration, just. The RTR 180 completed the 0-60km/h dash in just 4.44 seconds, beating the Pulsar 180's time of 4.64 seconds. The power on the RTR 180 is more focused towards the mid-range and it can be seen in the 30-70km/h roll-ons as the 180 bettered the time of the 160 by over 2 seconds in third gear and over a second in fourth gear roll-on. With the increased displacement and additional horses the RTR 180 recorded an impressive top speed figure of 119.95km/h. 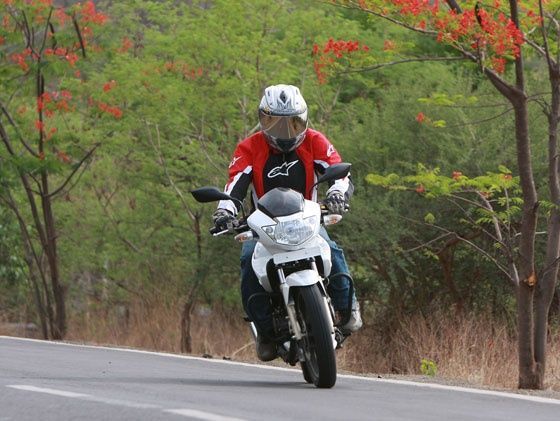 Living with it: The Apache RTR 160 was always my favourite. How could they better it more?

Yes, it might have been our favourite because of its strong racing credentials on the track and its enthusiastic engine waiting to be revved hard, but on the street, the jerky power delivery, twitchy handling and vibrations sure made it a difficult bike to ride around stop and go traffic. This is what has been bettered on the new RTR 180, big time. The vibes which were so strongly present on the RTR 160 right from 65km/h have totally disappeared on the new RTR 180 and even at its top whack, the bike feels smooth minus any irritating vibrations on the bars or the pegs. The power delivery is still a bit jerky and pesky in stop and go traffic, but a lot more tractable than the 160.

It is more street-friendly and handy and the motor revs freely upwards of 3,000rpm. The digital instrumentation layout remains same as the RTR 160 but gets a white dial making it more legible than before. But then again, TVS has faltered with its choice of tyres. The TVS rubber seriously hampers the joy of cornering as it fails to provide precise feedback. However, the rear tyre profile has been changed to 110 / 90 x 17" as against the RTR 160 configuration of 100 / 90 x 18". The increased displacement and wider tyre directly affects the bike's fuel efficiency to some extent but considering its performance and weight, the overall fuel consumption figure of 47.04 kmpl is reasonable. With a fuel tank capacity of 16 litres, it gives the bike an impressive tank range of 752km.

Competitive pricing is the key of the new Apache RTR 180. Priced at Rs. 63990/- ex showroom Delhi, the new Apache does offer great value-for-money. Hence, for bikers looking for something that has best of both worlds with class-leading features, the new RTR 180 makes a lot of sense. However, the competition is just equally well matched in terms of value-for-money and performance - two key areas that help in making the final purchase decision, in this segment.

View all Colours of Apache RTR 180

What is the price of TVS Apache RTR 180?

Does the TVS Apache RTR 180 have ABS?

What is the EMI of TVS Apache RTR 180 in Delhi?

What are the colours available in TVS Apache RTR 180?

57% users have chosen TVS Apache RTR 180 over Bajaj Pulsar 180 in a survey being conducted on zigwheels.com. Check out User rating comparisons.