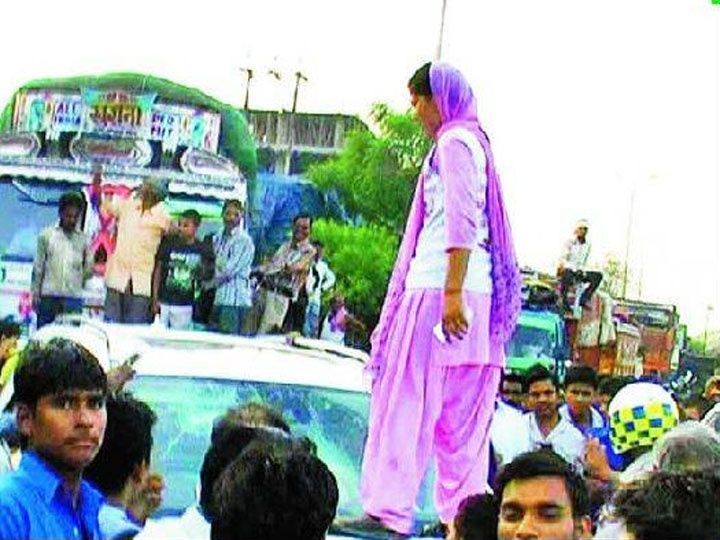 Sadhvi Pandey has set an example for every woman. The 23-year-old courageous woman from Agra took the bold move of sabotaging an SP functionary, Abhinav Sharma’s, Mercedes-Benz car upon being allegedly winked by the politican’s gunner. Pandey at an Agra traffic light not only jumped atop the local leader's Mercedes, but smashed the windshield after tearing off the party flag on the bonnet.

Reports suggest, the incident took place when the 23-year-old woman was riding on her scooter along with her sister to see a doctor. The leader’s gunner allegedly winked at her just as the scooty stopped at a traffic intersection alongside the cavalcade of Sharma.

Pandey left her vehicle behind and climbed atop the MLA aspirant’s car. She then uprooted the flag which fluttered at one end of the car and used it to break the luxury car’s windshield. The outraged woman challenged Sharma to come out of the car and face her.

According to reports, hearing the commotion, a number of people gathered at the spot. Sharma, however, remained inside his car, while a few of his guards who were travelling in an accompanying vehicle came out and took on the woman.

One of the men snatched the woman's mobile phone with which she had clicked the picture of the guard and threw it on the road. This further added fuel to the fire and enraged Pandey who demanded money for her damaged phone as well as an apology from the bodyguard. Finally, after a hour-long heated debate, the woman was paid Rs 6,500 as cost of her broken handset, and the matter was settled.

According to a report in TOI, Sharma who runs a prominent school in the city, stated that the he had agreed to pay the money as his men had misbehaved with the woman which they shouldn’t have done. However, he refused to admit that his security guard had winked at any of the sisters. The MLA aspirant instead claimed that his vehicle may have brushed against the women's scooty which might have infuriated them.

The woman’s courage took the social media by storm where people praised her for daredevilry spirit of dealing with eve-teasers.